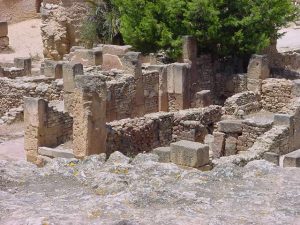 Who were the Berbers?

The first people to live along the North African coast were Berbers. The Berbers were nomadic shepherds and cattle herders. These people spoke a Hamitic language related to Ancient Egyptian.

The people living in North Africa were probably a genetic mixture of people from West Asia with people from West Africa. These Hamitic people frequently invaded Egypt. Egyptians called them Libyans. Sometimes the Libyans had a lot of power in Egyptian politics.

Phoenicians start the city of Carthage

But about 800 BC, Phoenician colonists arrived from West Asia. They started the city of Carthage, in modern Tunisia. Carthage had a good port, and an important military location.

Who were the Phoenicians?
Their god Ba’al
Their goddess Tanit

Carthage is located at a narrow point of the Mediterranean Sea, opposite the island of Sicily. So a navy that controls both southern Sicily and Carthage can control shipping in the Mediterranean. That’s what the Phoenicians did, so Carthage quickly grew into an important city.

When the Persians conquered Phoenicia in the late 500s BC, Carthage gained its independence. The Persians had no navy. They were not that interested in the Mediterranean. So Carthage was able to become an independent country. Like other places about 500 BC, Carthage set up as a republic. The adult male citizens voted on important issues and chose their own rulers.

In addition to North Africa and southern Sicily, Carthage also conquered and colonized a lot of Spain. The Carthaginians wanted to rule Spain because there were big silver mines there. And they wanted to start an  empire, just the way the Persians were doing in West Asia and the Romans were doing in Italy and Athens was doing in Greece.

Silver and silver mines
More about the Persians

The Punic Wars
Go on to Roman North Africa

The Young Carthaginian by G. A. Henty (1860s, reprinted 2001) This is a good adventure story that can introduce you to the wars between Rome and Carthage, but because it was written more than 100 years ago, it has some racist and unfair assumptions about the Romans being better people than the Carthaginians – watch out!