African architecture: the pyramids at Giza, in Egypt, about 2500 BC

Africa was probably the place where people first built any kind of building, because people lived in Africa before they lived anywhere else. But those early huts didn’t last.

Early history of Africa
All our Africa articles

What is a mastaba?

The first buildings we know about are from Egypt: small stone tombs known as mastabas, built about 3000 BC. Egypt was first, because Egypt was the richest part of Africa, where trade with West Asia was easiest. By 2000 BC, people, maybe migrants from Spain and Italy, were also building stone tombs all across North Africa. 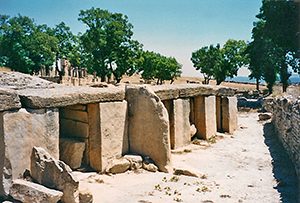 By that time, the Egyptians had moved on to building pyramids. The Egyptians started building the Pyramids about 2600 BC, when the Pharaohs first became rich enough to feed the huge numbers of people who must have worked to move all that stone.

More about the Pyramids
Pyramids and mathematics

Nobody knew how to build walls and columns that would hold up a heavy roof yet, so the Pyramids are solid stone: that’s the easiest way to build something big.

Palaces at Kerma in Sudan 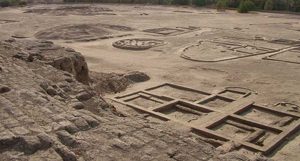 More about Nubia and Kerma

They couldn’t afford to build in stone yet, but they could build in mud-brick. The buildings at Kerma have many rooms, and show their designers experimenting with circular buildings and rounded apses.

What is an apse?
Adobe and mud-brick 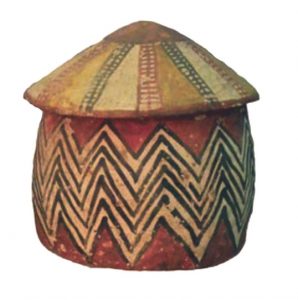 A clay model of an early house from Kerma, in Sudan

African houses in the Bronze Age

Meanwhile, ordinary people in Kerma – and probably in a lot of other places in Africa too – were living in round houses with one big room. These houses, like many houses in Europe at this time, were built of wattle and daub – branches woven together and covered with thick mud, and then whitewashed or painted. The roofs were generally thatched.

What is thatching?
Why do people whitewash their walls?
What is wattle and daub?

Most people lived in houses like this one, in a village with ten or twenty of these houses arranged around an open space where people could hang out and keep their goats and donkeys. In cold weather, people could build a fire inside their house, but usually they cooked outside too.

Where do donkeys come from?
African food and cooking 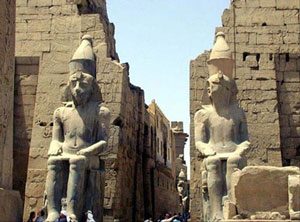 By about 2000 BC, architects in Egypt learned how to build temples using columns. At first they built temples of wood, with tree trunks for columns. Later they figured out how to make imitation tree trunks out of stone.

Even the stone temples temples generally had wooden roofs, so that the roof would be lighter and the columns could hold it up. These were more expensive than mud-brick, but much cheaper to build than pyramids, because you didn’t need so much stone. Egyptian pharaohs built many temples and palaces during the New Kingdom, around 1500 to 1200 BC.

People in other parts of Africa were building houses and temples too, but they couldn’t afford the workers to build in stone. They built out of mud or wood, and their buildings haven’t lasted.