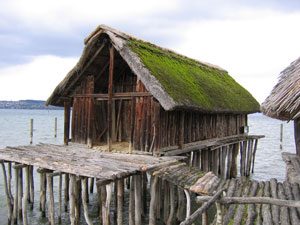 Bigger and better houses in the Bronze Age

As the people of Europe began to have more contact with West Asia and North Africa in the Bronze Age, about 3000 BC, they started to build more complicated houses like their neighbors and trading partners.

People built rectangular wattle and daub houses with thatched roofs. Many houses had big storage pits under them, to store wheat and barley in.

What is wattle and daub?
What is a thatched roof?

As the Urnfield culture spread across Europe, people were richer, and there were more of them. They began to build wooden fences or stone walls (without mortar) around their villages, and many villages were on top of hills. Some villages were built on stilts in the middle of lakes for safety (compare these to earlier Chinese stilt houses).

Most houses were still pretty small, but some were bigger, and might have been houses for a chief and his followers, dependents, and servants or slaves.

Learn by doing: what do people build houses out of near you? Are most houses wood or stone or brick? Walk around and see.
Iron Age architecture