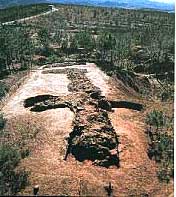 People in China started to build houses instead of living in caves about 5000 BC. That was about five thousand years later than the first houses in Jericho, but only a thousand years later than the first houses in Greece. People in Stone Age China built different kinds of houses depending on the weather where they lived. Some people built pit houses, dug into the ground for warmth. Other people built stilt houses, which kept cool in the summer. Some people moved back and forth, living in pit houses during the cold winters and moving to their cooler stilt house in the summer. Most houses were small, but some were bigger, maybe for richer families with servants or slaves. Some Chinese Stone Age villages have a bigger central house that may have been for meetings or praying to gods. Some villages have walls or moats, or both.

The earliest big ceremonial buildings in China date to about 4000-3500 BC. They were built about the same time as as the first cities in Mesopotamia or Egypt or South America. One example is the Goddess Temple at Niuheliang, in northern China. 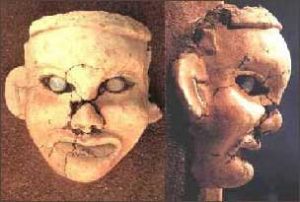 A statue head of a goddess from Niuheliang

The temple is gone now, because it was made of wood and the wood has decayed, but archaeologists have found the foundations so we know what shape the temple was. We also have some of the sculpture from the temple. This head of a goddess was part of the decoration of the temple. You could compare this head to the head from Warka from West Asia about the same time.