What is a vomitorium? Roman architecture 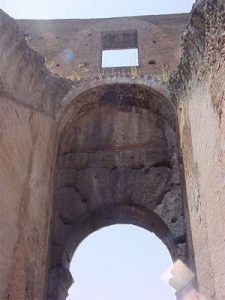 Vomitorium in the Colosseum in Rome(The roof has fallen in.)

You might think a vomitorium must have something to do with barfing, and those stories about Romans eating too much and then making themselves barf so they could eat more. But a vomitorium is really much more boring than that.

A vomitorium is called that because it’s a thing that something comes out of. When you puke, food comes out of your mouth. But in Roman architecture, a vomitorium is a hallway in a Roman theater or an amphitheater that people come out of – the hallway that you walk through to get to your seat, or to get out of the amphitheater after the show.

The plural of vomitorium is “vomitoria”. The design of vomitoria was very important to keep people from being crushed in the crowd when thousands of people were entering or leaving the amphitheater all about the same time. Vomitoria were very wide so that there would be room for all those people to get out. They had high ceilings so they wouldn’t feel too scary and there would be plenty of air to breathe.

You can see vomitoria still today at any big sports stadium or concert hall – though we don’t call them that anymore.