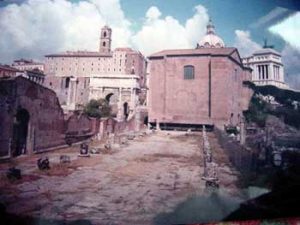 Sometimes the Romans had things they wanted to do in groups, but inside, out of the weather. Then they met in a basilica (ba-SILL-uh-ka). The word comes from the Greek word basileus, meaning a king. So a basilica started out as the king’s hall.

Who were the Persians?
The Basilica of Maxentius
Roman architecture
All our Ancient Rome articles

A basilica is a long hall. It has two or more rows of columns running down the long way. These columns help hold the roof up, as in many churches today. Like churches today, basilicas often had a rounded apse. Most Roman basilicas had the doors on the long side, though.

What is an apse?
More about columns

More about the Roman forum
And the Roman Senate House

What did the inside of a basilica look like?

The inside of a basilica was a lot like a modern Christian church or a medieval cathedral. A basilica had a big hall with columns down the sides to make aisles. You can see the bases of the columns in the picture of the Basilica Aemilia. Sometimes the Romans built a raised platform at one end for the important people to sit on. The floor of the Basilica Aemilia was made of pieces of many different kinds of marble. The marble came from Numidia and Egypt in Africa, from Greece, and so forth.  The Romans wanted to show all the different places that the Roman Empire ruled.

What is marble?
Where is Numidia?
Roman Egypt 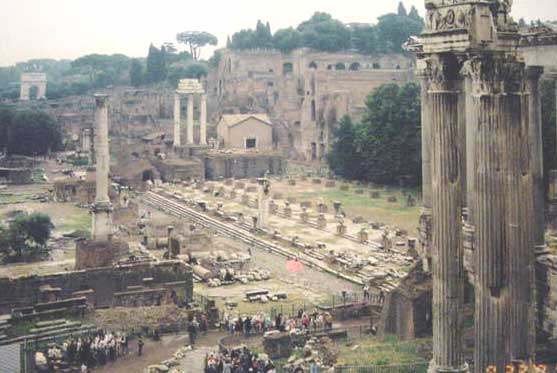 This is the ruins of another basilica, the Basilica Julia. The Basilica Julia was on the other side of the Roman Forum from the Basilica Aemilia. (The temple of Castor and Pollux is in the foreground.  The Column of Phocas is on the left).

The Basilica Julia was built in the time of the Emperor Augustus. That was at the beginning of the Roman Empire. Augustus named the basilica after his uncle and adopted father, Julius Caesar. Can you see the front steps, the side aisles, and the wide middle nave?

How are basilicas different from churches?

One difference from medieval or modern churches is that people usually went into a Roman basilica through a door in the middle of the long side, instead of on the short side.

What did people do in a basilica?

Inside the basilica, judges heard court cases, or politicians made speeches. Sometimes teachers held classes. Outside, on the steps of the basilica, people sold food or changed money in little booths. When the Basilica Aemilia burned down, some of the money-changers spilled their bronze coins running away. The fire melted the coins into the marble floor. You can still see them there today. 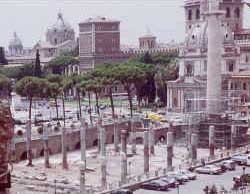 Basilica Ulpia – Trajan built this one near the old Roman forum

About 100 AD,  the Roman emperor Trajan added a new forum in Rome. It had a new basilica, the Basilica Ulpia. (In the background you can see the Column of Trajan. The Markets of Trajan are off to the right). 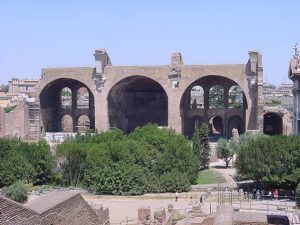 In the late empire, about 310 AD, the Emperor Maxentius built a new basilica at the other end of the Roman Forum. Constantine finished this basilica after he killed Maxentius, so we call it the Basilica of Maxentius and Constantine.

This basilica was absolutely enormous. But also, it was one of the first basilicas to have its doors on the short side instead of the long side. The change to having the entrance on the short side was new, so Christians used this new idea for their basilicas. But it wasn’t originally a Christian idea. 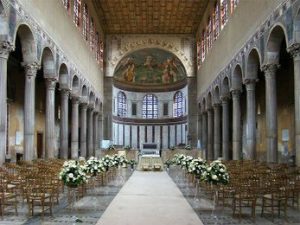 When Christians started to build churches in the 200s AD, they didn’t want them to look like temples. And anyway, they needed a different kind of space. Christian churches weren’t for animal sacrifice. They needed a place where a group of people could meet and hear each other talk. So the Christians built their churches like basilicas.

History of Christianity
Chartres Cathedral
All our medieval Europe articles

After Constantine converted to Christianity, people built many Christian churches, like Chartres Cathedral or the Duomo in Florence, using variations on the basilica form.

Learn by doing: build a basilica in Lego or in Minecraft
More about Roman basilicas

City : A Story of Roman Planning and Construction, by David Macaulay (1983). For kids – brilliant! The basilica is an early one.