The Duomo in Florence, Italy 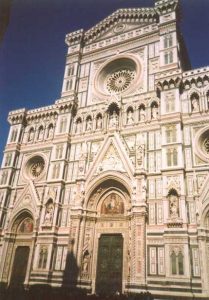 The Duomo in Florence (cathedral)

Why did Florence want a new cathedral?

The Republic of Florence started to plan this cathedral in the late 1200s AD, when Dante was growing up, to replace the old cathedral from about 500 AD that was too small and old.

Medieval Florence
Who was Dante?
The Florence baptistery
Medieval architecture
All our medieval Europe articles

They had already replaced their old baptistery, and now they wanted to do the cathedral. (Duomo means “cathedral” in Italian.)

Where did they get the money?

The government of Florence raised money to pay for their new cathedral with a tax on people’s wills. The new church was very big – it is the fourth biggest church in the world – and so it was very hard to build.

The first plan for the Duomo

Arnolfo di Cambio, the first architect to work on the Duomo (DWOH-mo) designed the new duomo in the Gothic style, with a main nave and two side aisles, and an apse in the back.

What is a nave?
What are aisles?
Okay, what is an apse?
Gothic architecture

But di Cambio died in 1302, and a new group of men took over the government of Florence. Work stopped for a long time.

In 1334, the artist Giotto agreed to work on the Duomo, but he only had time to build the campanile (bell-tower) before he died three years later.

Who was Giotto?
Who was Boccaccio?
Minarets and bell-towers
The Black Death

Then Pisano took over as the architect, but when a terrible plague killed thousands of people in Florence in 1348, work on the duomo in Florence stopped again. (This was the Black Death that killed many of Boccaccio‘s friends.)

The Duomo, with music recorded at the Duomo and the sound of the Duomo’s bells

Twenty-seven years later, in 1375, workmen actually tore down the old cathedral and began building the new one, somewhat modernized from the original plan which was now almost a hundred years old.

What is a transept?
What is a dome?
Fresco paintings

The third plan for the Duomo

In 1418, with most of the cathedral built, Brunelleschi (brew-nuh-LESS-key) designed a great dome to go over the high altar at the crossing (where the transept crossed the nave), and worked out how to build it. The cathedral – the duomo in Florence = was basically finished in 1436, even though the red, white, and green marble on the outside wasn’t finished until four hundred years later.

On the inside, there are fresco paintings by Paolo Uccello.