Who invented taxes? History of taxes 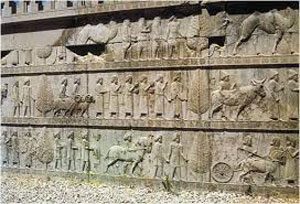 Taxes have been around for a long time. They are the main way people pay for their government. Or, to look at it another way, taxes are the main way that some powerful men and women force less powerful people to give them stuff. Taxation is when some powerful person or group decides that all the people – or some of the people – should pay some amount of stuff, or money, to the government, and uses the army or police to collect from people who do not pay.

One way of taxing people is called a head tax, or a poll tax (from the Latin word for head). The government says every person has to pay a certain amount, the same for everyone. Sometimes women or children pay less than men do (why would that be?). Sometimes you have to pay for your sheep or cows by the head too. This makes it easy to see how much somebody should pay. Rich people then pay the same as poor ones. But it is harder for poor people to pay it.

Another way of taxing people is by taking a percentage of whatever they have. That is harder to figure out, because people may not know or may not tell you how much they have, but rich people pay more than poor people, so it is easier for the poor to pay it.

Paying in cash or in kind

In the ancient and medieval worlds, the way people paid taxes was often not very fair. To start with, people didn’t have ID cards or numbers, so it was hard to know who had paid and how much they owed. If a rich person didn’t like you, he could say you owed more than you really did, while other people paid less than they should have.

Also, people tried to hide their stuff so they wouldn’t have to pay taxes on it. A Roman historian called Ammianus Marcellinus wrote in the 300s AD about Roman soldiers whipping Egyptian farmers to make them tell where they had hidden their stuff (in caves outside their village). 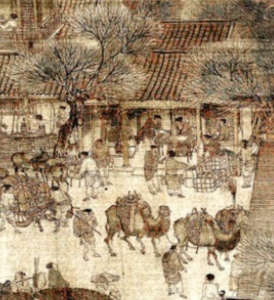 Or, people tried to cheat by paying in counterfeit money, or, if they paid their taxes in kind, by spraying their wheat with water to make it heavier (but it would also rot then and be no good to the people who had collected it).

Often governments got people to pay their taxes by calling the tax a contribution to the temple, to the gods. That’s why temples were often right by the gates of a town: to collect taxes from traders as they arrived or as they left the town. Sometimes when people seem to be fighting about religion, they’re really fighting about whether to pay taxes, and who should collect them.

Many towns built city walls for the same reason: so they could control who was coming in or going out, and collect taxes from them. Walls aren’t always about defending the town from violent enemies.

Did you find out what you wanted to know about the history of taxes? Let us know in the comments!

Bibliography and further reading about taxes: