Giotto in Florence and Assisi 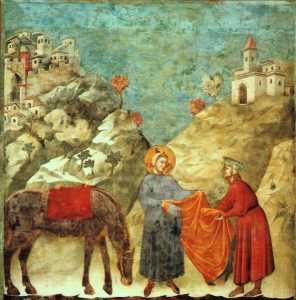 St. Francis giving away his cloak, from Assisi, Italy, probably by Giotto

Giotto was a medieval Italian painter. He lived around 1300 AD. Giotto was born in the Italian city of Florence about 1265 AD, and he lived most of his life in Florence. As a teenager, he may have been a student of the great painter Cimabue. It’s possible that he suffered from dwarfism.

What was going on in Florence? 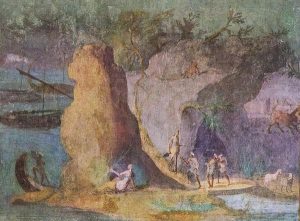 A Roman landscape painting of a scene from the Odyssey

Florence was a rich city when Giotto was living there. Many artists and writers lived in Florence, where people were building a big new cathedral. Dante was born the same year as Giotto, and he was writing poems. Dante heard the older philosopher Thomas Aquinas preach in Florence, and Giotto may have heard him too.

The cathedral of Florence
Who was Dante?
Petrarch and ancient Rome
Who was Thomas Aquinas?

Roman Palestrina mosaic, probably about 100 BC

Further south in Naples, first Robert the Wise and then his daughter Joanna of Naples were ruling southern Italy and Sicily. They ran a great university and a zoo there, and traded with Islamic merchants in Egypt and Tunisia.

More about Joanna of Naples

What was new in Giotto’s work?

When Giotto (jee-OTT-oh) grew up, he worked mainly in fresco painting. Some of his paintings were traditional, painted on wood with gold backgrounds. But some of Giotto’s paintings were very different from earlier medieval painting. 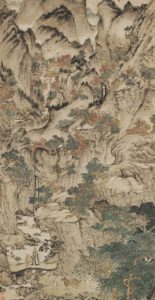 Song Dynasty Chinese painting from the time of Giotto

He started to put in natural landscape backgrounds to his painting. That looked very different from the plain gold backgrounds that his teacher Cimabue used. Giotto’s painting was a lot more like the paintings that Roman painters had done a thousand years earlier. He may have seen the Palestrina mosaic, near Rome. Or maybe his painting was like Song Dynasty Chinese paintings done during Giotto’s lifetime.

Because of his new ideas and his skill, Giotto did very well as a painter. He was able to buy land and live as a pretty well off person. 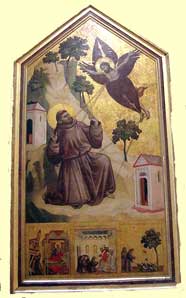 One of Giotto’s great achievements was that he (probably) painted the inside of the Franciscan church at Assisi, near Florence, with a series of huge frescoes showing the life of Francis of Assisi, who had started the Franciscan movement.

Who was Francis of Assisi?
More about the Benedictines
And medieval music

This video shows some more of Giotto’s paintings, with music by Benedictine monks (followers of Benedict).

The end of Giotto’s life

Giotto lived to be an old man. He outlived Dante by about twenty years. As an older man, he probably knew Petrarch, who was still young, and was collecting books by ancient Roman writers. Giotto died in Florence in 1337 AD, when he was 72 years old. (The Black Death hit Florence about 1350, after Giotto died.) The people of Florence buried their great artist in their new cathedral.