Dante wrote in Italian, not Latin

Who was St. Benedict?
Who was Thomas Aquinas?
More Middle Ages articles

But gradually the language people actually spoke had changed, so that by the 1200s AD, when writers wrote in Latin, most people couldn’t understand it without a translation into Italian. Dante was the first writer (after Francis of Assisi) to decide to write in Italian, instead. Dante showed that Italian was not just bad Latin, but a beautiful language suitable for writing poetry and literature.

Who was Francis of Assisi? 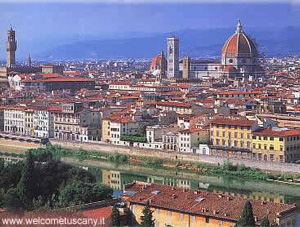 Dante was born in Florence, in 1265 AD. He seems to have had a happy childhood, even though his mother died when he was only five years old.

Dante’s parents were both from rich and powerful families in Florence, so unlike most kids in medieval Europe, Dante got a good education, probably home-schooled by a private tutor. He studied both modern (medieval) poetry and Roman poetry, especially Virgil, which he loved.

Who was Virgil?
Schools in medieval Europe

When Dante was twelve years old, his father arranged for him to marry a girl named Gemma Donati, who was also from a rich family in Florence. Even at twelve, Dante had already fallen in love with another girl, Beatrice, who was eleven years old (though he really didn’t know either girl). But that didn’t matter – he had to marry the girl his father chose for him. 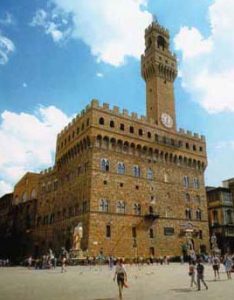 When Dante was twenty, he married Gemma, and they ended up having about five children. Dante never got to know Beatrice very well, but he always stayed in love with her anyway. But Beatrice died in 1290, when Dante was 25 years old and she herself was only 24. Dante was very upset when Beatrice died.

Dante’s father did let him hang out with a group of writers in Florence, and together this group began to write poetry in a new style – and in Italian. Like Francis of Assisi before them, they wanted ordinary people to be able to read their work, not just scholars. After Beatrice died, Dante tried to find reasons for why this terrible thing had happened, or some reason to go on living, by reading Roman philosophy.

Dante was from a powerful family, and he couldn’t just mope around and write poetry all the time. He got involved in politics and fighting, and even helped win some battles for his side, the Guelfs. But in 1301, when Dante was 36 years old, his side lost power in Florence, and Dante had to leave Florence and go into exile. His wife, Gemma, and his children stayed behind in Florence.

Why were the Guelfs and the Ghibellines fighting?

Even though Dante never stopped trying to get back to Florence, he never managed it, and he spent the rest of his life travelling around other cities in northern Italy. During this time he wrote his great masterpiece, the Divine Comedy – in Italian.

The Divine Comedy is divided into three parts: the Inferno, or Hell, Purgatorio, and Paradiso. Dante imagined that he himself was being given a tour of these places, and describes for us what he saw there. As he travels through the Inferno and the Purgatorio, the Roman poet Virgil is his guide – condemned to Hell forever because he was not a Christian.

What is Purgatory?
History of Christianity

Dante sees all kinds of people there, and describes why they are in Hell and how they are suffering. Then his great love Beatrice comes to guide him to Paradise, where Dante sees the face of God.

Still in exile, Dante Alighieri died in Ravenna in 1321 AD, when he was 56 years old. He may have died of malaria.

Did you find out what you wanted to know about Dante? Let us know in the comments!

Learn by doing: draw a picture of Hell and who would be in it if you were in charge
More about Boccaccio

Need a second source about Dante? Check out this article from Biography.com