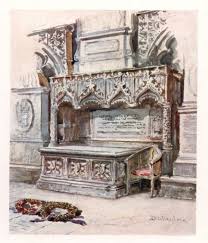 Geoffrey Chaucer was born about 1343 AD, probably in London, England, during the Hundred Years’ War. His father seems to have been pretty well off; he sold wine to bars and taverns.

Chaucer’s mother was also well off; she inherited twenty-four shops in London from her uncle. The plague struck England when Chaucer was about five years old, but he and his family survived.

When Chaucer (CHAW-sir) was about fourteen, he left home and became a page (a sort of servant) in the house of a rich lady, the Countess of Ulster. This was pretty normal in medieval Europe as a way for teenagers to meet other teenagers and be looked after without fighting with their parents. It was kind of like going to boarding school is for us.

The beginning of the Canterbury Tales in Middle English

Chaucer works for the government

When he grew up, Chaucer worked in the government, helping out various different rich men and kings. For a while he was in the English army. Chaucer travelled to Italy many times on government business, where he met Petrarch and apparently became familiar with Italian poetry and stories like those of Boccaccio.

Who was Petrarch?
And who’s Boccaccio?

Even though Chaucer had a busy life working for the King as a customs official and various other jobs, he found time to write a lot of stories too. The first thing he wrote that we know about is the Book of the Duchess, which he wrote when he was about thirty years old. But the most famous stories Chaucer wrote are the Canterbury Tales.

The idea of the Canterbury Tales is that a group of people are traveling together to Canterbury on a pilgrimage to pray at the shrine of St. Thomas a Becket. In the 1300s this was a common way for people to travel and improve the state of their soul at the same time. Chaucer begins by telling us,

These people, as they ride their horses along the road on their pilgrimage, naturally get to talking, and they agree that to pass the time they will each tell a story.

There are 24 stories altogether, mostly based on older stories, especially those that Chaucer had read in Boccaccio‘s recently published Decameron (whose stories are themselves based on older stories from the Indian Jataka Tales, the Arabian Nights, and the Shahnameh). Many of the stories involve rape, so maybe we aren’t too surprised to find out that when Chaucer was in his mid-thirties, he seems to have raped a young woman named Cecily Champain. Court documents show that he paid her money to settle her lawsuit.

What are Jataka Tales?
What’s the Arabian Nights?
The Persian Shahnameh

These are some of the stories:

When Chaucer died, probably in 1400 AD, he was about 57 years old. He was buried in Westminster Abbey.

What is Westminster Abbey?