A story about Theseus

Chaucer set his Knight’s Tale in ancient Greece, and it’s about Theseus, the king of Athens in Greek mythology. (So we can see that these medieval people knew all about Greek mythology!).

Who was Theseus?
And the Amazons?
Who was Chaucer?
More medieval literature
All our medieval Europe articles

In the story, Theseus is just coming back to Athens after a war with the Amazons, where he ended up marrying the Amazon queen. He’s bringing the queen, Hippolyta, back to Athens, along with the queen’s little sister Emelye (modern Emily).

As soon as Theseus gets to Athens, a group of crying women, dressed in black, beg Theseus to help them. A tyrant, Creon, has captured their city, Thebes, and killed their husbands, and Creon won’t even let them bury their husbands.

What’s a tyrant?
More about Thebes

Theseus immediately goes to Thebes, kills Creon, and captures the city. He has the women’s husbands properly buried. But two princes from Creon’s army, who are cousins, are only wounded. Theseus takes the princes back with him to Athens, to be his prisoners forever.

The brothers fall in love with Emelye

Several years later, the beautiful Emelye is walking in the garden below the tower where the princes are in prison. She sings and picks flowers, and one of the princes, Palamoun, falls in love with her. He prays to the god Venus that Emelye will help him and his cousin get out of prison.

Then the other prince, Arcite, also looks out the window, and he falls in love with Emelye too! The two princes fight over her. But they’re both in prison still.

After some months have gone by, Venus answers Palmoun’s prayer – partly. One of Arcite’s friends comes by and convinces Theseus to let Arcite go – but Palamoun has to stay in prison.

Then Palamoun also escapes from prison. He meets his brother Arcite, and they start fighting with swords over who is to marry Emelye. Theseus finds them fighting, and they confess the whole story. He is sympathetic to their love, and tells them that they will have to fight each other for Emelye’s hand in a big tournament. 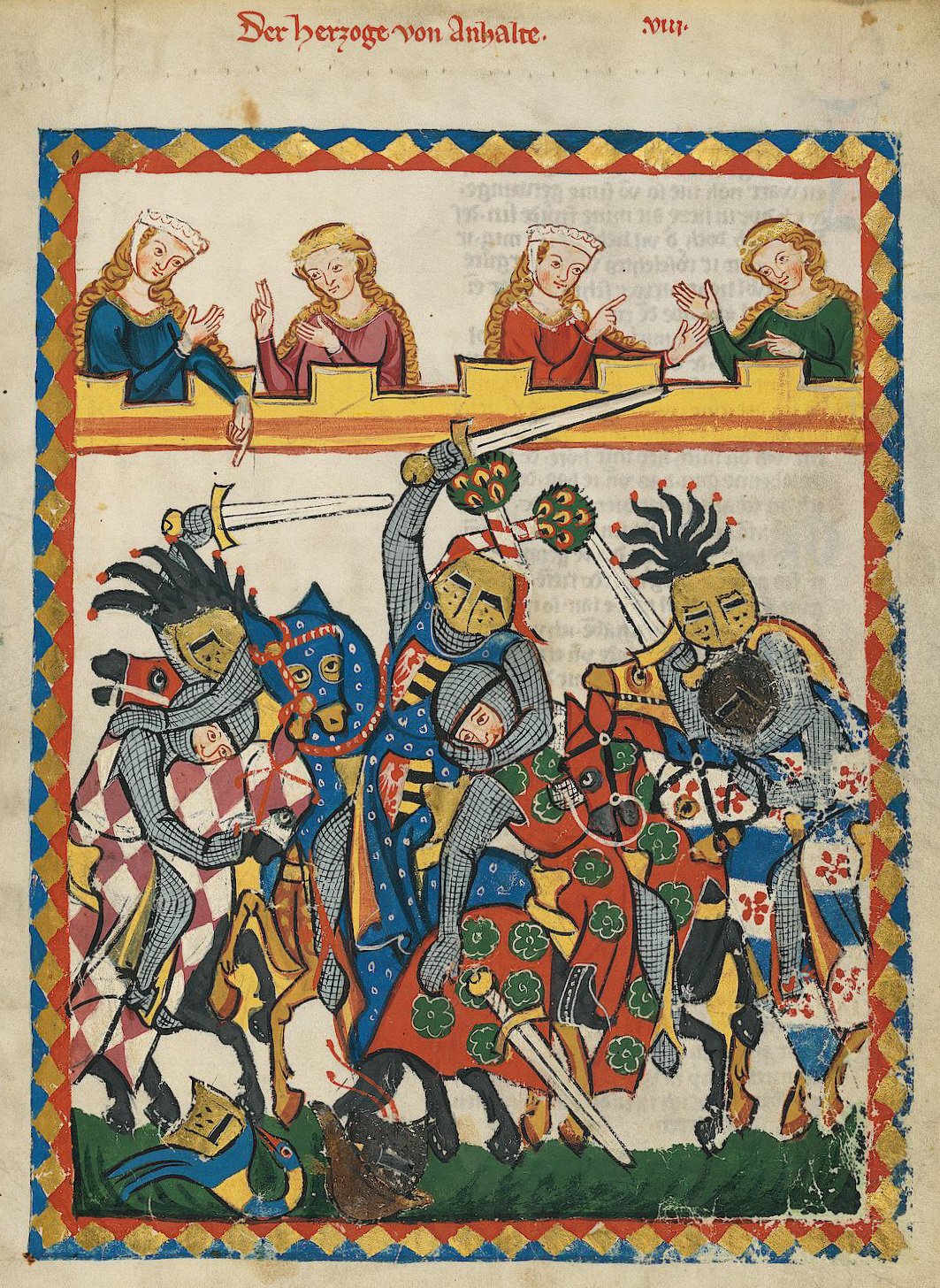 The god Mars
Who was Diana?

And sure enough, Arcite wins the tournament but dies of his wounds, so that in the end Palamoun gets to marry Emelye, and they live happily ever after. Or Palamoun does, anyway.

Learn by doing: holding a tournament

Chaucer’s Canterbury Tales, rewritten by Marcia Williams (2007). For kids, nine of Chaucer’s tales retold, including some of the funny ones. Edited to be appropriate for kids, with funny pictures.

The Canterbury Tales: In Modern English , by Geoffrey Chaucer, translated by Neville Coghill (2000). The complete text, translated into modern English. Some stories may not be appropriate for kids.