Hosting a medieval tournament – an activity 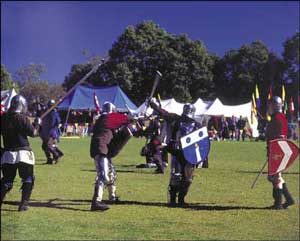 Modern-day re-enactors having a tournament

Tournaments were a common form of entertainment in the Middle Ages. A group of knights came together at the castle of some powerful duke or king, and they would spend the day fighting each other for prizes, sometimes one against one, and sometimes in teams. Tournaments took the place of our tennis matches and football games, although women were generally not allowed to participate. Most of the time men got hurt but they only occasionally got killed.

Why not have your own tournament?

Here’s a couple of kids bike jousting with noodles

First you’ll have to decide on a site, then mark off a rectangle for the fighting. Of course you don’t want to fight so that people get hurt! You might tilt at each other riding bicycles, with the object being to grab a balloon from the other person’s hand successfully, for instance, or to trade balloons as you ride by each other.

Or you might divide into two teams, each with balloons of different colors, and try to pop all the balloons of the other team.

Or you might decide to have a non-competitive event, where you all try to pop the balloons together, rather than having teams, and discuss whether we are less interested in competition today than the men of the Middle Ages were.

Notice the similarities to polo, which was popular in the Islamic world beginning a little earlier: are tournaments just a simpler, and bloodier, form of polo?

Bibliography and further reading about tournaments:

A day in Medieval Europe
More about the Middle Ages
Quatr.us home