Nubian archers in the Middle Kingdom (from the Nubian museum in Aswan, Egypt). About 2000 BC.

What is a mercenary soldier?

Mercenaries (MURR-sinn-air-eez) are paid volunteer soldiers: they are soldiers who are fighting as a job, not in order to save their country or for the glory of God. They only fight if they are paid, or for the booty they will get if they win. Often they will change sides if the other side offers more money.

Early African warfare
History of war
What about veterans?
The victorious army problem

Where did the first mercenaries fight?

In the 300s, Greeks fought for the Persians, in a civil war. It’s likely that the Lydians first invented gold and silver money in order to pay mercenary soldiers who were fighting for them.

The history of money

Egyptian kings and pharaohs also hired many Nubian men from Sudan to fight for them as mercenaries. The Persians hired Arabs. 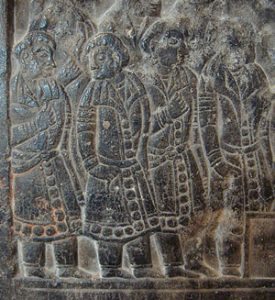 Mercenaries in the Early Middle Ages

In the 300s AD, the Romans hired many Germans as mercenary soldiers, often paying them in land and a share of the taxes (though we don’t understand very well how this worked). The Visigoths and the Ostrogoths both worked as mercenaries for the Romans.

Who were the Visigoths?
And the Ostrogoths?
Also the Vandals
Sogdian mercenaries
An Lushan’s revolt

Chinese T’ang Dynasty emperors hired Sogdians as mercenaries too, leading to An Lushan‘s revolt. In the 600s AD, some Arabs worked as mercenaries for the Romans, and others worked for their enemies the Sassanians. 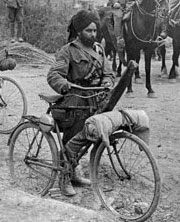 Sikh soldier in World War I

Mercenaries in the Middle Ages

Once the Arabs had founded the Islamic empire, they too hired mercenaries: the Abbasid caliphs hired the Seljuk Turks as mercenaries. On the other side, the Byzantine Empire hired Vikings to fight for them. Medieval European kings also hired a lot of mercenaries.

Who were the Seljuk Turks?
More about the Vikings

And then the British empire hired Sikhs as mercenaries in Northern India. Today there is less fighting than ever before, but even the United States army still hires contractors and subcontractors when there is a war.

Who are the Sikhs?

Learn by doing: talk to somebody who’s fought in a war about what it was like
More about war