Early African warfare: Nubian archers in the Middle Kingdom (from the Nubian museum in Aswan, Egypt)

The beginnings of war

There has been fighting in Africa since the early Stone Age, when one group of people fought and killed another group in order to take over their land along the shore of a lake, so they could gather shellfish there.

Gathering food
The Quaternary period
All our Africa articles

African wars in the Bronze Age

By the Bronze Age, with the beginning of farming and cities, wars got bigger and more people were involved. African soldiers, like the soldiers of Europe and West Asia and India, were generally men. These African soldiers also generally fought with the same weapons as in Asia and Europe – spears, leather shields, and bows and arrows.

History of leather
Flint spearpoints
Obsidian  weapons
Bows and arrows
What about bronze?

Nubian archers from Sudan were so good at killing people that Egyptian pharaohs hired them as mercenaries beginning in the Middle Kingdom, about 2000 BC.

What is a mercenary soldier? 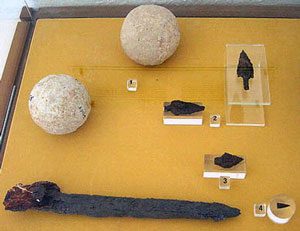 Carthaginian weapons (from the Byrsa museum in Carthage, Tunisia)

The Punic Wars: Carthage and Rome

In North Africa, about 200 BC, Carthaginian soldiers killed people with iron spears and knives, but also with stone balls shot from catapults.

One famous Carthaginian general was Hannibal, who fought the Second Punic War against the Roman Republic.

By 1000 AD (and maybe earlier), soldiers in West Africa were also fighting wars with iron-tipped spears and bows and arrows. This is an archer from Djenne (modern Mali), from around 1400 AD. Do you see the quiver on his back to hold his arrows? 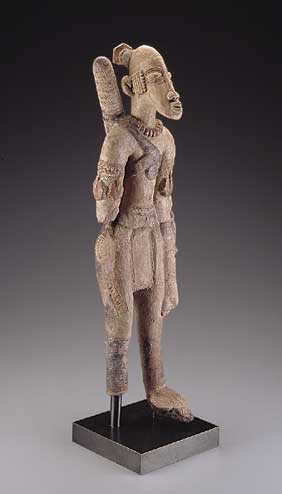 But when men came from Portugal and attacked the people of Ghana and Mali in the late 1400s AD, these Portuguese people had new weapons – cannons.

Cannon (metal tubes that used exploding gunpowder to shoot big stone balls) had just been invented in Europe and China in the 1300s, and West African generals hadn’t heard about them yet. So the African armies were at a big disadvantage.

Learn by Doing – Bows and Arrows