When was the Middle Kingdom? Ancient Egypt 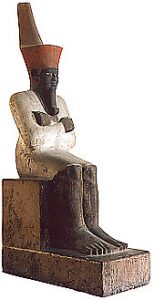 What was the Middle Kingdom?

Historians (since about 1845) have divided the history of Bronze Age Egypt into three big chunks, with political collapses separating them: the Old Kingdom, the Middle Kingdom, and the New Kingdom.

When did the Middle Kingdom start?

The Middle Kingdom was formed after a series of wars between the rulers of Upper Egypt (the South) and Lower Egypt (the North). The rulers of Upper Egypt won, and they reunified the country about 2000 BC, with the capital first at Thebes in the south, and then at a new city just south of Memphis. The kings of this period are not as powerful as before.

They show themselves as taking care of their people, instead of as god-kings as in the Old Kingdom. They are the shepherds of the people now. The nomarchs (local officials) are powerful. In this period, the Egyptian kings first started to control places further north of Egypt like Jerusalem, Jericho and Syria. There was a lot of trading with Byblos, near modern Beirut. They’re probably trading both by donkey caravan and by sea, on boats.

Who were the Phoenicians?
Phoenician ships and sailing
Early African sailing
Abraham and the Jews

Bibliography and further reading about the Egyptian Middle Kingdom: