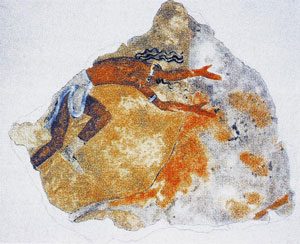 Minoan painting on the wall of the Hyksos palace

Around 1786 BC, some people we call the Hyksos invaded Egypt. The Hyksos invasion ended the Middle Kingdom and started the Second Intermediate Period. The Hyksos, who were invaders from West Asia, took over the eastern part of the Nile Delta. That was North-Eastern Egypt, the part closest to Asia. Nobody knows for sure who the Hyksos were, but they seem to have been Amorites. The Amorites spoke a Semitic language related to Hebrew and Arabic. They came from the area around Syria and Israel, an area which had done a lot of trading with the Egyptians during the Middle Kingdom. Probably the Hyksos brought horses and chariots to Egypt for the first time.

The Hyksos built themselves a new capital city at Avaris (modern Tell el-Dab’a) in the Nile delta in Lower Egypt, and brought over Minoan painters to decorate it for them.

Learn by doing: Hieroglyphs
Go on to the New Kingdom