Although people in Northern Europe were doing cave paintings tens of thousands of years earlier, the first paintings from Greece are not until the Late Bronze Age, about 1700 BC. They come from the island of Crete, where the Minoans lived.

Minoan people created these paintings as wall decorations in the palaces of the Minoan kings and queens.

When they plastered the walls, they brushed paint onto the wet plaster, so that the paint soaked into the plaster as it dried: that’s called a fresco painting (“fresco” means “fresh”. 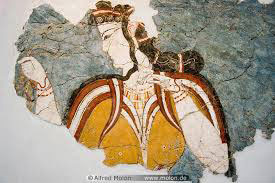 Like the earlier cave painters further north, the Minoans were very interested in nature, and loved to paint life-like plants and animals. These three people – probably slaves– are bull-dancing, which seems to have been a popular kind of gymnastics in ancient Crete – maybe a competition, or maybe like gladiatorial games. 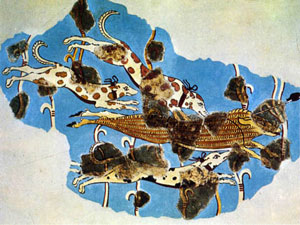 Across the Aegean Sea in mainland Greece, the Mycenaean Greeks were happy at first just to copy Minoan painting, but soon they changed the style to suit themselves. Mycenaean paintings were also fresco paintings on the walls of their palaces, but they are stiffer and more formal than Minoan paintings. Mycenaean artists were more interested in people and horses and less interested in nature. When there are animals, they’re working with humans: here hunting dogs attack a wild boar. You might say that the Mycenaean style is a mixture of the natural European style with the more formal, stiffer West Asian style.