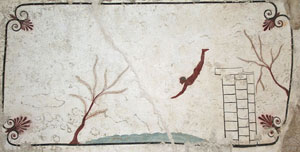 Artists in Classical Greece continued to favor the stiffer Mycenaean style of painting more than the looser, fancier Minoan style.

Classical Greek painters usually didn’t include any background, and they focused mainly on people rather than trees or flowers in their pictures. That’s the same attitude as in Greek vase-painting or Etruscan wall-painting in northern Italy from the same time. Up to this point, Greek art is not very different from West Asian art either. 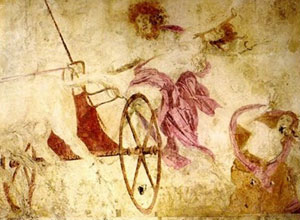 But a little later, in the Hellenistic period, Greek painters became a lot more interested in painting livelier, more naturalistic pictures. Artists worked to show Persephone‘s clothing blowing in the wind, or Hades driving a chariot.

Who was Persephone?
Hellenistic sculpture
What’s the Hellenistic? 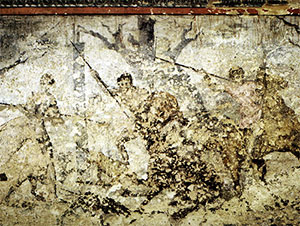 The half-naked women with their wild clothes are the same nudes as in Greek sculpture or South Italian vase painting at the same time.

But this hunting scene, disregarding the forest to emphasize the hunters and horses, shows the same interests as in Mycenaean Greece a thousand years earlier. 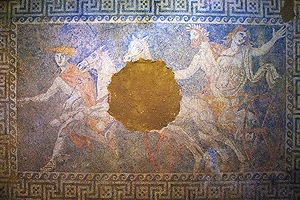 Artists naturally chose Hades kidnapping Persephone to the underworld to decorate tombs, but the theme of men dominating horses and women seems super-Greek.

West Asian audiences apparently shared the Greek interest in naturalism, because by the 300s BC more and more Greek artists were working in the Persian Empire, bringing their Hellenistic painting styles with them.

More about the Persian Empire

Learn by doing: do your own painting of Hades and Persephone
More about Greek Painting