Who is Hades? – ancient Greek gods 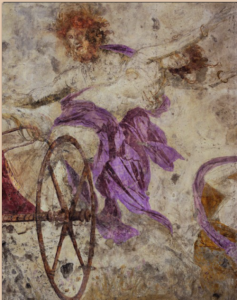 Hades and the underworld

In Greek mythology, Hades was the god of the dead, who ruled the place where dead people went after they died (Sometimes people also called the underworld “Hades”). He is a rather shadowy figure in more ways than one, spooky and cruel, and the Greeks didn’t like to talk about him too much. There aren’t that many pictures of him either.

Generally people who had good intentions did not sacrifice to Hades. People sacrificed to him when they wanted something bad to happen, like if they were trying to get revenge on an enemy.

The Greek agon
What is sacrifice?
Homer’s Odyssey 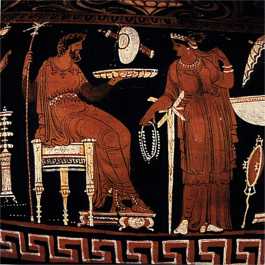 Hades and Persephone in the underworld

When they did, instead of burning the fat and the bones so the smoke would go up to the sky, instead they poured blood into pits or ditches dug into the ground (as in the part of Homer‘s Odyssey where Odysseus visits the Underworld).

Like Poseidon, Hades does not appear in very many Greek myths. The best-known of the myths he is in are those of Persephone and Orpheus.

The story of Persephone
A project about Persephone

Learn by doing: Greek God Bingo
More about the underworld

Bibliography and further reading about the Greek gods:

Myth-O-Mania: Have a Hot Time, Hades! by Kate McMullan (2002). – a “cool” retelling of myths from a different point of view.

Aspects of Death in Early Greek Art and Poetry, by Emily Vermeule (1979). She’s an expert on early Greece, and this book goes into detail about what the Greeks thought happened to people after they died. For adults.