Who is Hera? Ancient Greek gods 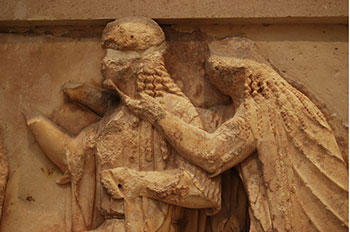 The Greek god Hera was the sister and wife of Zeus.

Hera is the sister and wife of Zeus (the Greeks did not approve of this arrangement for real people but, like the Egyptians, they thought it was okay for gods).

The daughter of Earth

So Hera, like Zeus, is the daughter of Earth (Rhea) and Kronos. Her grandmother was Gaia, and her grandfather was Ouranos. She’s an earth god descended from other earth gods. When the sky god Zeus lay on top of the earth god Hera, as the sky covers the earth, that made food grow for people to eat.

When did people first worship Hera?

People were worshipping Hera in Greece as early as the Bronze Age – she probably came to Greece from Central Asia with the Yamnaya people, about 2000 BC. So she may be a lot older, but we don’t know because the Yamnaya people didn’t use writing.

Who are the Yamnaya?
Bronze Age timeline 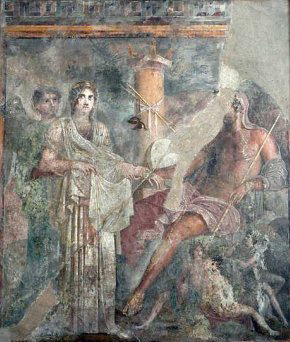 What was Hera the goddess of?

Among the Greek gods, Hera was responsible for marriage and the family. Greek men thought of her as mean and selfish and generally unpleasant to be around, like their idea of a nagging wife.

She’s always getting mad at Zeus about something. But people did sacrifice to her, especially at a wedding, as Indians did to the Hindu goddess Lakshmi.

Hera is the mother of Hephaistos, the god of volcanoes and blacksmithing. That’s appropriate, because she is an Earth goddess and volcanoes are born out of the earth.

Hephaistos
Ares, god of war
What is an agon?

She’s also the mother of Hebe, the god of youth, and Ares, the god of war. (Maybe because she is associated with agons). Different Greek story-tellers disagreed about whether Hera’s husband Zeus was the father of these children, or maybe Hera just made them on her own, with no father.

What are some other stories about Hera?

Throughout all the stories, Hera spends a lot of her time trying to get back at Zeus for having other girlfriends besides her. When one of Zeus’s girlfriends has a baby, Hera hates that baby and tries to get rid of it. The most famous of these babies is Herakles, who was the son of Zeus and a human woman named Alcmena. Herakles gets his name because of his (terrible) relationship with Hera. Another famous story about Hera is the one about Echo and Narcissus.

Who is Herakles?
Echo and Narcissus

When did people stop worshipping Hera?

People kept on worshipping Hera – often by her Roman name, Juno – all over the Roman Empire until the 300s AD, when most people became Christians and stopped worshipping the older gods.

Bibliography and further reading about Hera:

We Goddesses: Athena, Aphrodite, Hera by Doris Orgel and Marilee Heyer. With a feminist view.