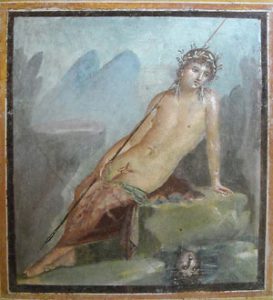 Narcissus and his pond (Third Style Roman painting from Pompeii, about 79 AD) – Echo and Narcissus

Where is Echo’s story from?

Echo and Narcissus is a story we know mainly because Ovid wrote it down in his poem, the Metamorphoses. It’s a traditional Greek story – there are illustrations from Greek vase painting about 500 BC. But Ovid’s is the best known version.

Who was the poet Ovid?
More Greek myths
More Latin literature
All our Ancient Rome articles

In this story, Narcissus was a very beautiful young man who was very beautiful. Everyone admired him. He started to admire himself, too. He was always going and looking at his beautiful reflection in puddles and ponds. (There weren’t any glass mirrors yet, and it’s hard to see yourself well in a polished metal mirror). Narcissus was so beautiful that people were always falling in love with him.

How do reflections work?
Who invented mirrors?

He got so used to everyone falling in love with him that he started to treat them badly. He would make fun of people who cared about him, and be mean to them.

One girl in particular, the nymph Echo, fell in love with Narcissus. But he didn’t care about her. He told her to get lost. Echo followed him around, sadly repeating everything he said. But she gradually faded away out of sadness, until only her voice was left. That’s the echo you can hear in valleys today.

What’s the point of the story?

Narcissus’ rejection of Echo is a form of hubris. Narcissus was acting like a god, who people should worship, but he wasn’t really a god. The gods didn’t like Narcissus acting this way. They decided to punish his pride, as in our proverb, “Pride goes before a fall.” 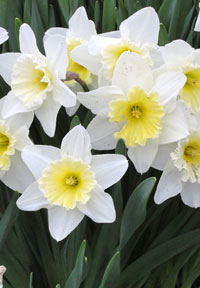 What is hubris?
The Greek gods
Greek gods bingo

What happened to Narcissus?

So he just stayed there, admiring his own reflection, until he starved to death. (Or in some other versions, until he realized it was hopeless and killed himself with his own sword.)

What does Narcissus mean?

Narcissus is the name of a kind of daffodil. (It’s actually a pre-Greek word, passed down from the people who lived in Greece before the Greeks arrived.) Greek and Roman people pointed to these daffodils and said they were the soul of Narcissus, still standing by the pond, admiring his own reflection.

Other stories about hubris

You can read more Greek stories about hubris. There’s the story of Niobe which is also in Ovid, or the story of Arachne, who got turned into a spider. Or the story of Tantalus. How are these stories the same?

Bibliography and further reading about Ovid and Narcissus: