History of iron and early steel 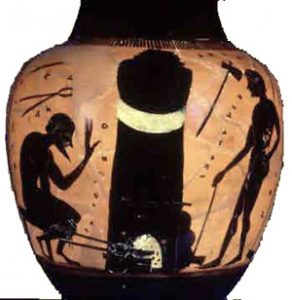 History of iron: a Greek black-figure vase showing a blacksmith at work (Athens, about 550 BC)

Why do people use iron?

The history of iron doesn’t start until much later than bronze. Iron is harder to form into metal than copper or bronze, because it needs a much hotter fire and a more complicated process.

What is iron?
History of bronze
West Asian science
All our West Asia articles

But if you can figure out how to do it, iron is also much more useful than copper or bronze. Also, iron is very common all over the world, so everyone can get it cheaply.

You need to use a bellows

Here’s an Ancient Greek vase showing a blacksmith heating up a furnace to smelt iron ore into iron. A younger boy works the bellows to blow the fire hot enough.

Invention of the bellows

Below, there’s a video of a blacksmith making something out of iron. First he heats up the metal so it will get softer, and then he beats it into shape with a hammer. Nobody could work iron until they figured out how to build a bellows to get their fires hot enough.

The Hittites figure out how to make iron

Because iron is so hard to make, nobody used iron before about 1500 BC. Then the Hittites in West Asia did learn how to use it. Once people had these hotter fires, they also started to make more glass.

Who were the Hittites?
Who invented glass?

Hittite iron bracelets and pins from what is now Turkey, about 1200-1100 BC

Gradually all the West Asian and Mediterranean people started to use iron: the Greeks, the Egyptians, the Kushites, the Jews, the Philistines, the Romans, the Carthaginians, and the Assyrians. Iron-working travelled east, too, reaching India around 800 BC.

People who lived in China learned how to make iron by around 700 or 600 BC, during the Eastern Zhou dynasty. Iron quickly spread to Laos, too. By 300 BC, smiths were using iron in Vietnam. And iron-workers in Greece were burning coal to get hotter fires.

By about 300 AD, people in West Africa and East Africa had also learned the secrets of making iron. Some people think they learned how from the Egyptians; other people think the Africans figured it out on their own. Since then, iron has been the metal people use most all over Afro-Eurasia.

History of iron: what did people use iron for?

Not only was iron cheaper and easier to get than bronze, it also made better tools. With an iron sword, you could slice as well as stabbing with the point. Iron armor was lighter and stronger than bronze. So Iron knives and scissors were sharper than bronze ones and stayed sharp longer.

Iron fish-hooks were stronger and lighter and sharper than bronze or bone hooks. Iron cooking pots weighed less, got hot faster, and held heat better than clay pots. And iron bars were stronger and could hold more weight. In India, by the 1000s AD architects were even making iron beams to hold up the roofs of big temples.

But people didn’t stop with just inventing iron. Not long after people started using iron in Central Asia, they improved on it by inventing steel. Steel is iron with extra carbon in it. Around 300 BC, people began to make high quality steel in India and in Central Asia (modern Uzbekistan and Afghanistan). Steel swords were stronger and sharper.

Steel sewing needles were thinner and sharper, too. With steel needles, people started to sew clothes more instead of just wrapping pieces of cloth around themselves. Central Asians and Indians started to sell their steel to West Asia and China along the Silk Road. Indian steel manufacturers were buying high quality iron ore from Central Africa, carried on river boats to ports along the coast of East Africa, so they could make higher quality steel. By the 800s AD, the Vikings were making the long trip south-east from northern Europe through Russia to buy Central Asian steel, too.

More about sewing needles
And about the Vikings

Did you find out what you wanted to know about the history of iron and blacksmithing? Let us know in the comments!

Learn by doing: look around your house. What is made of iron?
More about steel

More about steel
Why does iron rust?
Chemistry of Iron
Quatr.us home