Who invented sewing? History of clothing

When people first started to wear clothing, about 60,000 years ago, they didn’t sew it at all: they just wrapped leather or furs around themselves.

History of clothing
Who invented string?
Where is leather from?

Probably they soon began to tie their clothes on with string or leather cords. People continued to wrap their leggings on this way for thousands of years, and some people still do.

But about 45,000 BC, when people first began living in Central Asia, where it was colder, they wanted warmer, stronger clothing. They began to use sharp pointed sticks or stone tools called awls (pronounced OLLS) to poke holes in their clothes.

Then they could run the cords through the clothes instead of just around them. They used the awls to poke the end of the cord through the holes, too. Both Neanderthals and modern people used awls this way. 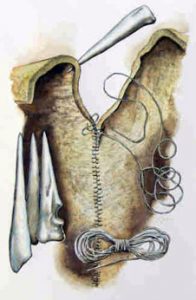 Sewing with an awl

Then maybe around 40,000 BC, still in Central Asia, somebody had the idea to make a hole in the end of the awl and thread the first needle.

This made sewing a lot faster and easier, and soon the new idea spread to other cold places like northern Europe and North America.

People made these early needles out of bone and ivory, like awls. People were also starting to use spindles and spindle whorls to make thread – these were the first wheels and axles. Nobody knows whether they were weaving clothing yet, but they were weaving mats and baskets.

Around 9000 BC, people in West Asia began to do a lot more spining thread out of wool or linen and weaving cloth out of it. It was much easier to sew cloth than to sew leather, so people began to do more sewing. Probably also with the end of the Ice Age, there were not so many big

History of spinning
And of weaving

When people began to use bronze, about 3000 BC, they soon started to make sharper, lighter needles out of bronze. The earliest ones are from Tepe Yahya in Iran. Probably people used leather scraps as a thimble. But these needles still weren’t thin or strong enough for fine sewing.

It took so long to spin and weave a piece of cloth, that people generally didn’t want to cut the cloth up: it was too valuable.

Plus, bronze needles were too thick and bendy to do fine sewing with. Most people wore the whole piece of cloth, wrapped around them as a sari or a shawl or a cloak or a toga. T

o make a tunic, Egyptians and Greeks wove a tunic-shaped piece of cloth and just sewed the sides together. But in Central Asia, where people rode horses, they sewed their cloth into pants. It was cold, too, so they sewed thick quilted jackets and coats.

By about 100 BC, people were using iron needles at Manching in Northern Europe (and maybe in the Roman Empire too), but these iron needles, like the earlier bronze needles, were too weak and thick for any fine sewing. In the Roman Empire, people kept on wearing tunics with cloth loosely wrapped around them. But then they invented steel sewing needles.

Bibliography and further reading about sewing: