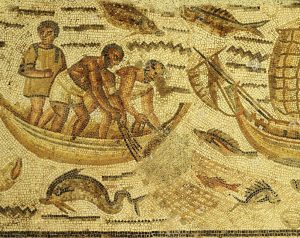 All of the cloth used in the ancient world was made with thread produced by hand spinning very slowly. There are different methods: the spinning whorl can be at the top of the spindle or at the bottom, and in some cultures the spindle stays on the ground like a top, but the methods all work on the same principle).

All over the world, women did almost all of the spinning. Many little girls were good at spinning by the time they were five years old (Chinese foot-binding may have become popular because it forced girls to sit still and spin).

All women had to spin, because hand spinning was so slow that even if all women spent most of their time spinning for their entire lives, clothes were still very expensive. And women also had to spin for sheets, blankets, towels, napkins, and diapers. Old women who couldn’t even walk spent their days sitting and spinning.

People also had to spin thread for other uses, not just for clothing. Sailors and hunters needed a lot of thread and rope for fishing nets and hunting nets and ships. For spinning fishing nets, rope and other things men used, sometimes men did the spinning. 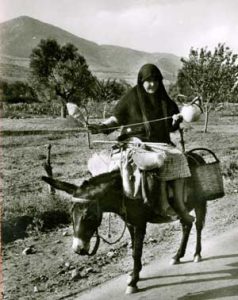 Spinning all the time

There are a lot of different fibers that people used to spin. Probably people began by spinning plant fibers, like hemp and flax (The kind of cloth you make out of flax is called linen). Not long afterwards, people began to spin wool as well, and then cotton and silk.

When you’re done spinning the thread, then you have to weave the cloth
Learn by doing: a spinning project
Spinning wheels

Bibliography and further reading about spinning: