What is wool? History of wool – Clothing

A sheep in a pasture

The most interesting thing about wool is that sheep didn’t always have wool, or not enough to notice. When people first started hunting sheep, they hunted them for their meat. Sheep hair was more like deer hair is today, short and thick, not long and fine and curly. Like goat hair.

Then around 10,000 BC people in West Asia began to domesticate sheep (tame them) and take care of them, so there would always be plenty of meat around. At this point they began to use the milk from the sheep also, either drinking it fresh or making it into cheese. When they had killed a sheep, of course they would also make the skin into leather, and maybe leave the hair on to make it warmer, like a fur coat. But still there was no wool as we know it today. 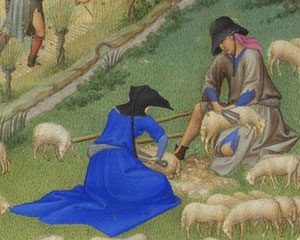 Some time not too much later people also began to make clothes, instead of just wearing furs. Since they had sheepskins around, one of the fibers they used was sheep hair. They noticed that although none of the sheep hair was really any good for spinning, because it was too thick and brittle, some of the hair from the stomach, the underside of the sheep, was better than the rest. And people began breeding the sheep that had the most good hair together, trying to get some hair you could spin. It took thousands of years, many many generations of sheep, but by about 5000 BC, people could begin to spin wool.

Sheep being sheared for their wool on the Isle of Skye, Scotland

Wool has a lot of advantages over vegetable fibers. It is easier to prepare it for spinning: you just cut it off the sheep and comb it out. It is easier to spin than cotton or flax, and quicker. It is warmer – that’s why sweaters are made of wool, and sometimes socks, and blankets. (Though this is also a disadvantage in very warm climates like Egypt). Lanolin is a kind of natural oil on the wool makes it shed water, so it is a good fiber to wear if you will be out in the rain (as shepherds often are). And you can dye wool more easily than flax, so you can have clothes in pretty colors and patterns.

The main center of wool production in antiquity was Central Asia, where the cold winters made wool a favorite material. Scythian shepherding nomads made wool into felt blankets, boots, and yurts. The Scythians and Sogdians, like the medieval Turks and Mongols, also wove wool into clothing, knitted hats, and created knotted wool carpets for their floors. They sold these carpets, and all their wool clothes and hats, on the Silk Road, west into China, south into India, and east into Europe. 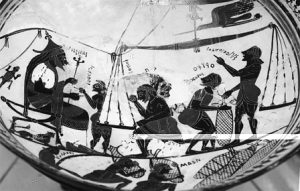 People in ancient West Asia, Greece and Rome, and in northern Europe, also wore a lot of wool clothing. But they also produced wool cloth to sell. Assyrian, Hittite, and Mycenaean kings in the Bronze Age all forced women taken as prisoners of war to live in big spinning and weaving factories making wool clothing, blankets, and rugs that they could sell. At the other end of classical antiquity, the Roman emperor Diocletian also shut women up in big textile factories.

When the Roman empire collapsed in the 400s AD, so did the European wool industry. But it picked up again around 1000 AD and continued through the Middle Ages; people in medieval Britain and Italy, especially, raised a lot of sheep for wool. British traders sold their best wool to be spun and woven and eventually knit in Italy, and then traders from Florence and Venice shipped the woolen cloth across the Mediterranean to the Islamic Empire.

Learn by doing: find wool clothing in your house
What about hemp cloth?
What about linen cloth?

Bibliography and further reading about the history of wool:

Warm As Wool, Cool As Cotton, by Carter Houck (1986). Easy reading – includes the history of these fibers.

Women’s Work: The First 20,000 Years : Women, Cloth, and Society in Early Times, by Elizabeth Wayland Barber (1995). Not so easy to read, but an interested high schooler could read it. Fascinating ideas about the way people made cloth in ancient times, and why it was that way.