How do you make felt? Central Asian clothing

Felting probably got started in Central Asia or West Asia, about 6000 BC. That was soon after people started to keep tame sheep and breed the sheep to grow wool. Nobody knows how people figured out how to felt wool. Probably people observed matted wool right on the sheep, and then figured out how to make it themselves. 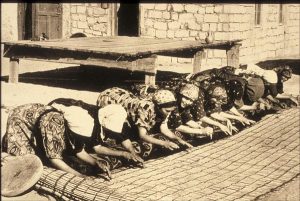 Women in Central Asia getting ready to roll felt

You make felt by beating wool together until it all knots up and all the little fibers get tangled up with each other. It’s faster and easier to make a big piece of felt than to spin wool and then weave it into a blanket. The result is thicker and warmer than a woven blanket, too. To roll the wool, women took wads of raw wool and got it wet. Then they rubbed it back and forth until the fibers were all meshed with each other.

Mongolians and other Central Asian people sometimes made felt by rolling up wool inside leather skins and having a horse drag the roll around until it was felted. You can see that in this movie.

Felt was good at keeping people warm and dry in cold weather, especially when knitting hadn’t been invented, so there were no sweaters or knitted socks. Felting spread from Central Asia. Soon people all over Asia and Europe used felt. About 1500 BC, as we know from the Urumchi mummies, people in what is now western China were using felt, or tufts of matted wool that were almost felt. In ancient Greece, people wore felt hats. In the 100s AD, Roman soldiers used felt pads as armored vests, felt tunics, felt boots, and felt socks. By about 500 AD, the Vikings, further north, made felt blankets too.

In Central Asia there weren’t enough trees to build out of wood, so the Mongols used felt for the walls of their houses, called yurts or gers. People also made felt rugs and blankets.

Bibliography and further reading about felt and felting: