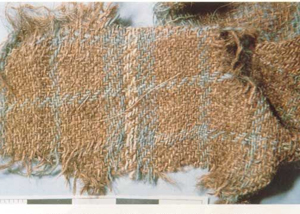 Plaid wool fabric from about 1000 BC, from western China

Clothes were really important to keep you from freezing to death. So people worked hard to get as much warm clothing as they could.

A lot of clothing inventions got started in Central Asia. The world’s oldest bone and ivory needles (if they really are needles) come from Kostenki (modern Russia) from about 40,000 BC, so probably Central Asian people invented sewing.

More about the invention of sewing

By around 3000 BC, many people in Central Asia rode horses most of the day. While they were riding, or in the evenings, they wove bands of decorated cloth, an inch or two wide, sort of the way you do finger-knitting. Later, they sewed these bands together along the long edges to make a skirt or a tunic.

But also, a lot of different groups of people lived in Central Asia. These groups of people moved around a lot, finding pasture and water for their cattle and camels. So people used clothing to be able to tell quickly what group a person belonged to, and if he or she was an enemy or a friend.

Another way people could tell what group you belonged to was from your tattoos. People in Central Asia had tattoos that showed their identity from at least the 3000s BC, and probably from long before that. 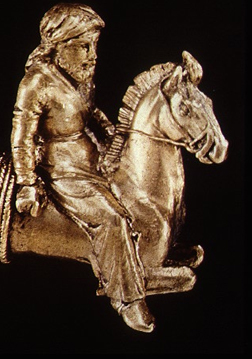 By around 3000 BC, Indo-European herders living in Central Asia were weaving sheep’s wool into plaid cloaks and skirts. Different color and width in the stripes of the plaid allowed people to tell what group you belonged to.

More about the history of hemp

By the 400s BC, people in Central Asia were also making and wearing wool felt, which helped them to stay warm and dry in cold weather.

More about how to make felt

A Scythian man (Behistun frieze, about 490 BC)

What did Scythian people wear?

Around 500 BC, Scythian people living in Central Asia wore robes belted at the waist, like this man riding a horse.

(Who were the Scythians?)

Underneath their robes, Scythian men wore pants made of woven hemp or leather. Central Asian people invented pants, because they were useful for men and women who spent a lot of time riding horses.