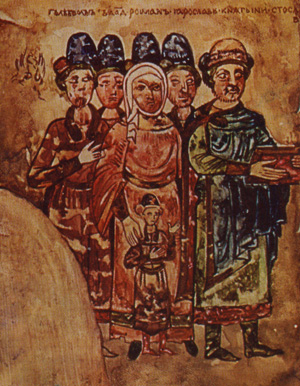 At the western end of Central Asia , Russian people, who were mostly farmers and not herdsmen in the Middle Ages, dressed more like their Byzantine neighbors to the south than like the Mongols. But it’s cold enough in Russia that even very poor people had to own leggings and cloaks if all possible.

Most women in Russia wore long woven wool tunics with long loose sleeves and belts at the waist. Women’s clothing had to be loose enough to still wear it if you were pregnant, because women couldn’t afford to have special maternity outfits. They covered their heads with veils like Islamic and European women. Men also wore wool tunics belted at the waist, but knee length and with tighter sleeves. Over their tunics, people wore wool cloaks to keep warm. But the men also wore caps, just like Mongol men further east and like the earlier Scythians.

Kids – as you can see in the picture – dressed like small adults, so the little boy has on a knee-length tunic and a small cap with ear-flaps like his father.