People in India wore mostly cotton clothing. India was the first place where people grew cotton, even as early as 5000 BC in the Stone Age. Men wore dhoti, a cloth wrapped around their waists and knotted at the back. Some men also wore turbans on their heads; many men wore man-buns and kept their beards short or shaved. Men kept on dressing like this for thousands of years.

What did women wear in ancient India?

Women wore short skirts, just from the waist to the knees, and a cloth head wrap, maybe to keep the sun off. Women wore necklaces and bracelets, too, made of stone and shell beads, and later of bronze and silver and gold.

More about Indian beads
What is bronze?

By the Vedic period, women wore cloth wrapped and pinned around themselves much like the outfits of Iranian women or Greek women. Some women wore skirts wrapped and pleated around their waists and knotted in front, with a separate piece of fabric for a shawl or veil, and a tight shirt underneath.

What is a sari?

By the Guptan period in late antiquity, about 500 AD, many women had shifted to wearing one very long piece of cloth called a sari (still with the tight shirt underneath), that they wrapped around themselves in different ways. The word sari comes from a Sanskrit word that just means cloth.

The Vedas are the first written stories that mention saris, about 600 BC. Rich women wore saris made of silk from China, but most women wore cotton saris. Today, many people think of saris as the main type of Indian clothing.

What is silk?
More about the Gupta period

How did women wear their sari?

There were many different ways of draping saris, depending on how rich you were and where you lived in India. To dress up, women wore their sari like skirts with a top part thrown over their shoulder or worn over their heads as a veil. Working women often pulled their sari up between their legs to make a sort of pants.

Women who were fighting with the army tucked in the top part of the sari in the back, to free up their arms for fighting. Most saris were five or six yards long, although some saris were nine yards. Younger women generally wore brightly colored saris, but widows and other women in mourning for someone who had died wore only white saris.

Indian clothing: How to put on a sari

At the same time, the first sharp steel needles reached India from China, and as a result rich men and women began to wear stitched clothing fitted tightly to their bodies, with lots of embroidery. But most people still wore saris. Often people wore embroidered saris over their tight shirts. 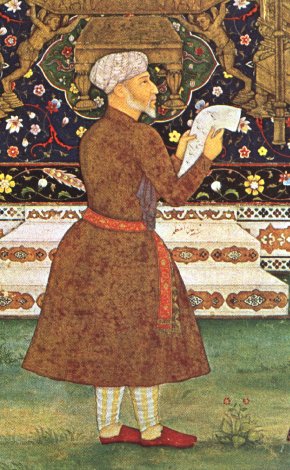 Both men and women started wearing Iranian pants and tunics

With the Islamic invasions around 1000 AD, Iranian fashions in clothing entered India. Ancient Indian clothing became medieval Indian clothing. Both women and men started to sometimes wear trousers with long tunics over them down to their knees, called churidar or salwar kameez. Women generally wore churidar with a long veil or scarf over it.These fashions became popular, especially in northern India. But they never replaced the sari or the dhoti.

Indian women who could afford it usually wore a lot of silver or gold jewelry, especially earrings and nose-rings. Sometimes they also put a spot of red on their foreheads called a bindi (BINN-dee) as a decoration.

What did Indian children wear?

Babies in India often wore nothing or just a cloth wrapped around them as a diaper. Little kids usually wore a plain tunic down to their knees – a long shirt – if they wore anything. Older kids dressed like their parents. However, girls generally did not wear sarees until they were married, or at least until they were older teenagers. Before that, they wore tunics and trousers (salwar kameez) in northern India or skirts with tops (pattu langa) in southern India.

Did you find out what you wanted to know about ancient Indian clothing? Do you have more questions? Let us know in the comments!

Learn by doing: practice putting on a sari or a dhoti
More about Indian cotton
And more about silk
More about Ancient India

The Sari, by Mukulika Banerjee and Daniel Miller (2004). For adults, a great discussion of what it’s really like to wear a sari.

More on Indian costumes and activities