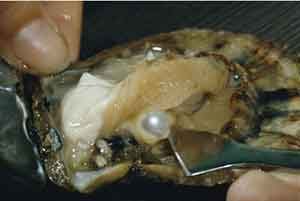 A pearl inside an oyster

Very early in human history, maybe around 100,000 years ago, many people lived along the coasts of Africa and lived mainly on seafood – seaweed, fish, clams, mussels, and oysters. This gave people a very easy, reliable (and delicious) food source.

A mother-of-pearl necklace from Ancient Egypt(ca. 2500 BC, now in the Louvre)

These gatherers found that some kinds of oysters (not the kind you eat) had pearls inside them. When tiny worm larvae get inside oyster shells, they are dangerous to the oyster. 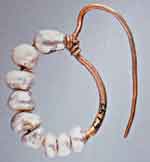 Pearls are basically oyster scabs, or oyster bandaids, that protect the oyster from the tapeworms. They’re hard, shiny spheres, and (though the oysters don’t care) they also happen to be very pretty. As people left Africa and travelled around the world, they kept right on gathering shellfish and finding pearls, from India to Japan to Brazil.

By around 3000 BC, in the Bronze Age, traders were selling Arabian pearls in Mesopotamia (modern Iraq) and ancient Egypt. Ancient Greek people also dove for pearls.

Trained pearl divers (often enslaved or very poor people) dove to the bottom of the ocean and brought up oysters. In Greece and India, mostly men dove for pearls; in Japan, it was mostly women. 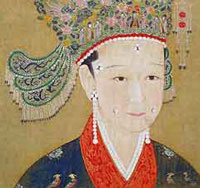 You had to open up hundreds or thousands of oysters to find even one pearl, so pearls were very expensive and rare, even though pearl divers were poor. A cheaper version was mother-of-pearl, the inside coating of pearl oyster shells, which all pearl oysters have. People used this cheaper mother-of-pearl all over, from Egypt to China and Ecuador. 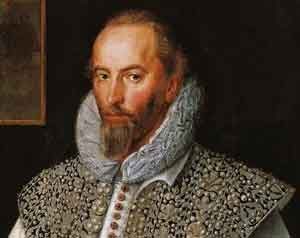 The rise of the Silk Road in the 300s BC encouraged rulers to send thousands of divers down to the bottom of the ocean to find pearls to sell. Kings in Sri Lanka (an island south-east of India) got rich selling pearls. Rich people wore pearls in China and Japan, in the Persian Empire, in Ptolemaic Egypt (Cleopatra wore them), and the Roman Empire. Pearls were so expensive that Roman glass workers made fake pearls out of glass-coated silver. About 500 AD, Chinese manufacturers started to put tiny Buddhas inside freshwater mussel shells so they would get coated with pearl, too. 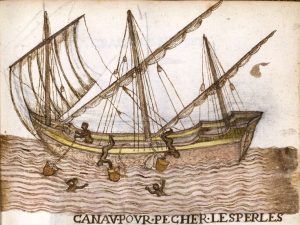 Enslaved Africans diving for pearls in Venezuela in the 1500s.

When Portuguese ships started to sail to the Caribbean in the late 1400s, they immediately carried back thousands and thousands of pearls to Spain. Under Queen Elizabeth, British pirates seized many Portuguese cargoes of pearls and took them to England, and rich Europeans started wearing heaps of pearls. Portuguese companies forced thousands of Tupi and Arawak people to dive for pearls in the Caribbean and Brazil. When the Native people died, the British and Portuguese enslaved Africans (because they were good swimmers), brought them over, and made them dive for pearls. By the 1700s, pearl divers had killed so many oysters looking for pearls that pearls became rare again. 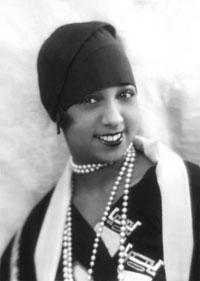 About 1895, British and Japanese biologists figured out how to get oysters to make pearls every time, by using recently invented steel needles to inject little pieces of pearl and bits of dead oysters (ugh!) inside a living oyster. By the 1920s, factories with millions of oysters were making lots of these cultured pearls, and almost everybody could afford a pearl necklace. The invention of plastic about the same time meant that if you couldn’t even afford cultured pearls, you could always get plastic pearls!

Learn by doing: go see some real pearls in the jewelry department of a store
More about the history of swimming

Bibliography and further reading about pearls: