Blown glass and the Silk Road 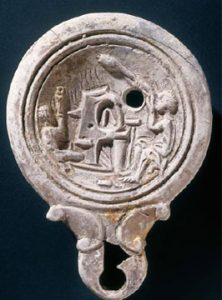 Glass-makers and the Silk Road

Increased trade on the Silk Road in the 200s BC forced traders to try to come up with new things to trade that other people would want. West Asia was already way ahead of China, India, Europe, and Africa in glass-making. So West Asian glass-makers looked for some way to make their glass even more exciting to traders.

Around 75 BC, the Phoenicians figured it out: a new, much better way to make glass, much faster and cheaper than before. They learned how to blow glass. It’s also possible that it was Egyptians who figured out how to blow glass.

Who were the Phoenicians?
Hellenistic Egypt

So how do you blow glass?

You stick a gob of hot glass onto the end of a long clay pipe, and you blow through the pipe as if you were blowing up a balloon. The air makes the gob of glass blow up, just like a balloon. (Later on, people used iron pipes to blow glass instead of clay.) People who made glass already had these long clay pipes sitting around, because they blew into them to make the fire hotter so they could melt glass. Probably glass manufacturers were looking for a way to produce a lot of glass cheaply, so they could sell a lot more of it. It wasn’t a big step to think of blowing a gob of glass through the clay pipe.

Invention of the bellows
Smelting iron

Then as you blow you can shape the glass with an iron stick. This isn’t easy, but it is a lot easier and much faster than making core-formed glass!

Blowing glass at the Corning Museum in New York State

What is mold-blown glass?

Soon after this, the Phoenicians also figured out how to just blow the glass right into a mold (we call this mold-blown glass). Then you don’t even have to shape it yourself, and you can get all sorts of fancy shapes.

Glass became cheap enough to replace pottery cups for most people, and was very widely used all over the Roman Empire and the Parthian Empire.

Glass became one of West Asia’s main products for the Silk Road (so much that Chinese traders often called it the Glass Road) and international trade. By around 50 AD, glass-blowers were using iron pipes to blow the glass, instead of clay ones. 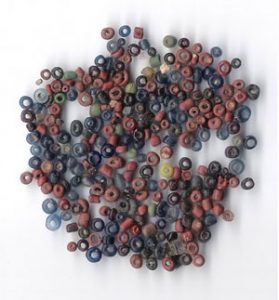 Glass beads from Arikamedu in India, about 200 AD

Where did people make glass?

Glass-makers in the Eastern Mediterranean and Egypt made almost all of the glass in the ancient and early medieval world. They had the right kind of sand. And in Egypt, they had a good supply of natron to mix with the sand.

Earlier glass-makers had mixed plant ash with sand and lime to make glass. The plant ash lowers the melting temperature so it is easier to melt. But in Roman Egypt, glass-makers figured out how to use natron instead.

Natron is a kind of salt – sodium carbonate. It evaporates naturally from some lakes in Egypt. As the summer goes on and the lake dries up, the salt around the edges of the lake dries into thick cakes. Pliny the Elder tells us that Egyptian people harvested these natron cakes and store them to use in making glass. That was more efficient and cheaper than burning plants for ash.

More about Pliny the Elder

Egyptian glass-makers mixed sand and lime with this natron to make glass. They made huge blocks of glass – as much as twenty tons at one time. Then they broke the big blocks into chunks with hammers and sold the pieces of glass to traders. Later on, when Egypt had used up a lot of their natron, they also bought natron from other African places like Sudan and Chad.

(In the Parthian Empire, though, they didn’t have these natron lakes, so they kept on using plant ash.)
Later people in Europe, Africa, and West Asia used little pieces of this opaque glass to make colored mosaic floors.

More about mosaic
Make your own mosaic
The Parthian Empire

But then they wanted to make transparent glass

About 60 to 70 AD, people realized they could get much cheaper blown glass, transparent vessels. They all wanted colorless glass. Raw glass is usually bluish or greenish. To make it colorless, they added a little antimony (which was better) or manganese (cheaper but not quite as high quality). You could even carve this transparent glass to look like rock crystal.

Who made the glass into bowls and cups?

Traders sold the big blocks of glass from Syria and Egypt to glass-workers who made it into useful things. There were big centers of glass production not only in Phoenicia but also further west in modern Köln (northern Germany) and other places around the Roman Empire.

And there were centers of glass production further east in the Parthian Empire and at Taxila (in modern Iraq and Pakistan).

Some of these glass-makers may have been travelers. They came to a city, set up a temporary glass kiln, turned out a few batches of glass bowls and cups and sold them, and then moved on to another town.

Did the Romans use glass in their windows? 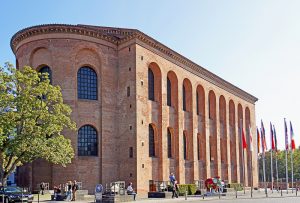 History of glass: The Basilica of Constantine in Trier, in southern Germany (300s AD) was built with window glass.

Yes, they did. Once people could blow glass and it got cheaper to make, they started to use glass in their windows. You could blow a big cylinder of glass, and then slice it when it was still hot and open it up into a flat rectangle.

Many Roman basilicas and markets had glass in the windows – sometimes clear, and sometimes colored like medieval stained glass windows. One example is the Basilica of Constantine in Trier, in southern Germany.

Did the Romans and the Parthians recycle broken glass?

Yes, glass recycling was a big thing in the ancient world. The Roman poet Martial mentions people who collected and sold broken window glass and bowls to glass-makers. Roman glass-makers sorted this recycled glass into different colors, melted it down, and recycled it. Often glass was recycled, melted down, and blown into a new shape several times.

Roman and Parthian traders shipped glass through Central Asia and India as far as East Africa and China and Japan.

It wasn’t only the Romans and Parthians making glass, either. Indian glass factories at Arikamedu made glass beads and plaques that they sold as far east as the Philippines and west to West Africa.

Southern Chinese factories made beads and plaques, but they didn’t figure out the much more difficult process for making blown glass until about the 400s AD.

How Glass Is Made, by Alan J. Paterson (1985). Easy reading, but it’s really about modern glass technology.