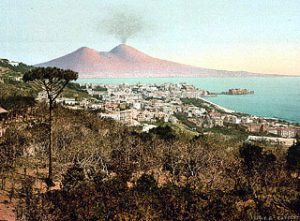 Who was Pliny the Elder?

Pliny the Elder was a very rich man from one of the most important families in the Roman Empire. He lived during the end of the Julio-Claudians and into the Flavian period, and he died in 79 AD.

Unlike other people in his family, Pliny was not very interested in politics. He became an admiral in the Roman navy, but he liked to spend most of his time writing.

Pliny the Elder wrote a tremendous Natural History, in many volumes. It’s an encyclopedia of everything anybody knew about at that time, with his own ideas too. Pliny describes the spices you could find in India, the habits of honeybees, the different kinds of trees, and everything else you can think of. He figured out that amber was fossilized tree resin, because of the insects stuck in it. He knew a little bit about where cotton came from.

History of bee-keeping
India and cinnamon
Where does cotton come from?

Not all of Pliny’s encyclopedia survives, but a great deal does. Of course he is not right about everything he says. But it is interesting to see what the Romans thought about how something worked, even if it isn’t what we think today.

Pliny and the eruption of Vesuvius

Pliny the Elder died in the volcanic eruption of Mount Vesuvius in southern Italy in August, 79 AD. He was in charge of the small fleet anchored in the Bay of Naples near Pompeii. The mountain had been smoking for several days. But Pliny, staying at his house near Pompeii with his nephew, the younger Pliny, had not been too concerned. Mount Vesuvius often smoked.

More about volcanoes
Who was the Younger Pliny?

But one day it began to smoke worse and worse, and put out poisonous gases as well. Pliny decided that the people of Pompeii would have to be evacuated. He ordered the ships under his command to go to the beaches nearest Pompeii and begin the evacuation, and he went with them to organize the operation.

Under Pliny’s command, the ships did evacuate many people and so saved them from the eruption, but Pliny himself was overcome – maybe by his asthma – and died a hero’s death on the beach. His nephew, Pliny the Younger, had stayed at the house in safety, and wrote an account of the experience in a letter to the historian Tacitus.

Learn by doing: visit a volcano if you can
More about Pliny the Younger

Bibliography and further reading about Pliny the Elder: