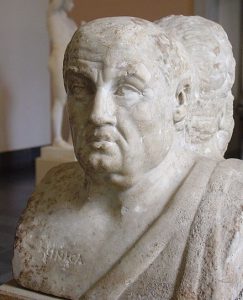 Lucius Annaeus Seneca was one of the great writers of the Julio-Claudianperiod in Rome. He was born in the Roman province of Spain about 3 BC. But his aunt took him to Rome during the reign of the emperor Claudius, so Seneca could get a good education. Seneca’s father was a well-known teacher in Rome, so people called him Seneca the Older (Seneca Maior) and Lucius got called Seneca the Younger (Seneca Minor).

When he grew up, Seneca the Younger became the teacher of Nero, when Nero was a little boy (little sons of the emperor didn’t go to school; they were homeschooled with private teachers of their own). When Nero grew up, though, he didn’t like having his old teacher still hanging around telling him what to do. In the end he made Seneca kill himself. Seneca got in a warm bath and slashed open his own wrists and bled to death, with his friends around him, discussing philosophy.

In addition to being Nero’s teacher, Seneca was also a famous philosopher and writer. He wrote Latin versions of many Greek plays, including for instance the stories of Medea and Phaedra. But he is best known for his Latin versions of Stoic philosophy. Seneca’s Stoicism took the form of saying that the reason the Roman Republic had collapsed was that people indulged in too much pleasure, and too much politics, and they failed to keep a peaceful and serene mind. You can see from this that he probably did not like Nero’s parties much!

Learn by doing: how might Stoicism change your life?
More about Nero
More about the Stoics

Bibliography and further reading about Seneca and Stoicism: