The Roman emperor Augustus, first of the Julio-Claudians

How did Augustus get power?

Everybody was tired of all this fighting and killing. And everyone was afraid of Octavian. So when Octavian just kept ruling almost as if he were king, nobody tried to stop him. He made people call him Augustus (which means The Good) instead of Octavian. But he was smarter than his uncle Julius Caesar had been. 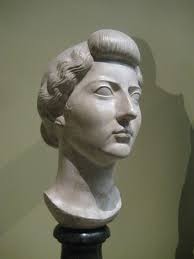 Why didn’t they just kill him?

Augustus didn’t call himself dictator. He said he was just the First Citizen. He didn’t disband the Senate. Instead, he made the Senate do what he wanted. And he had himself elected tribune, so he could veto whatever the Senate did that he didn’t like. People knew that Augustus was really taking over, but as long as there was peace and he didn’t SAY he was taking over, it was okay with them. 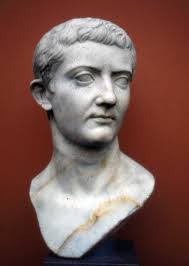 Augustus lived a long time, until 14 AD. When he died, hardly anyone could remember before he was in power, or all they remembered was killing and blood. His son-in-law (his daughter Julia’s husband) Tiberius took over as First Citizen. Tiberius wasn’t really a very good ruler (we call them emperors now, but they didn’t call themselves that). He spent a lot of time swimming and having big parties. He left most of the work to his assistants. But still people thought that was better than civil war. 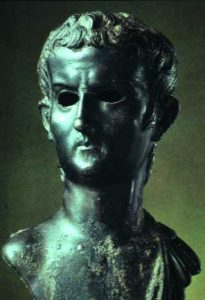 Tiberius died in 37 AD, and his nephew Germanicus’ son Gaius, who is often called Caligula, took over. Caligula tried to force the Senate to admit they really had no power anymore. To make fun of them, he did crazy things like making his horse a senator, and marrying his sister. It was true that the Senate couldn’t stop him. But it turned out there was another possibility. By 41 AD people decided he was too hard to deal with and his own guards killed him.

After Caligula was killed, Caligula‘s uncle Claudius took over. He did better than people expected. In his reign the Romans succeeded in conquering England and making it into another province. But Claudius’ wife Agrippina poisoned him (according to the Roman historian Suetonius) with bad mushrooms, and he died.

More about Claudius
Who was Suetonius?

In 54 AD, therefore, Claudius’ stepson Nero took the throne. Nero was only 16, and his mother Agrippina really controlled politics through him (because women could not be tribunes or senators), until Nero was in his mid-20s. But then he decided he would rather rule on his own, and had his mother killed.

The Roman emperor Nero – the last of the Julio-Claudians

Nero may be best known for how he handled the Great Fire at Rome in 64 AD. People were blaming him for the fire, and so he rounded up a lot of Christians and had them burned alive as if the fire was their fault. St. Peter and St. Paul probably also were martyred (killed) during Nero’s reign.

Who was St. Paul?
The Christians and the Fire
Nero’s Golden House

After he killed Agrippina, Nero became unpopular with the Senate, and in 68 AD the governor of Spain, Galba, revolted against him and marched his army toward Rome. When it was clear that he was going to lose, Nero killed himself. He was the last ruler from the family of Julius Caesar and Augustus – the last of the Julio-Claudians.

Did you find out what you wanted to know about the Julio-Claudians? Let us know in the comments!

Year of the Four Emperors