Nero and the Great Fire of Rome – Christianity

In the reign of the Roman Emperor Nero, during the night between the 18th and the 19th of July, 64 AD, there was a great fire in the city of Rome. It started in a very poor area downtown called the Subura (suh-BOO-rah), and at first none of the rich people cared very much: fires often burned down apartment buildings in the poorer areas of Rome, because people lived in three- or four-storey wooden buildings. They cooked and heated their rooms with fires in little braziers (like a hibachi).

The rich people just built a big stone wall between the slum and the better parts of Rome, to keep the fire from spreading to their own houses. Usually that worked pretty well. But this time the fire spread over the wall. It burned down a lot of downtown Rome. People were very upset.

Nero was out of town on vacation when the fire started, at his house in the country. After all, it was the middle of July. When he heard about the fire, he came back to Rome. People expected that he would help out somehow: maybe give people money to rebuild their houses, or hand out blankets, or something. But he didn’t. 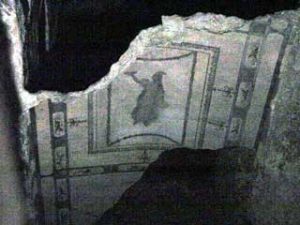 A wall painting from the Golden House of Nero

Instead, Nero announced that he was going to take a lot of the land where the buildings had burned down and build himself a great big new palace there, called the Golden House. And he did (you can see part of his Golden House today, if you go to Rome).
People were angry that he hadn’t helped them, and they started saying that Nero had started the fire himself in order to clear land for his palace. Nero needed to find someone else to blame, fast!

Nero thought of the Christians. By this time people had learned that Christians were different from Jews. Many people hated the Christians anyway, so they wouldn’t mind blaming them. Roman people hated Christians mainly because they were different, and because they tried to get other people to become Christians too. So Nero arrested a bunch of Christians. He blamed the fire on them, and had them burned alive. We know about this from both Suetonius and Tacitus (although both of them are repeating things they were told; Tacitus was about nine years old when this happened and living far away in Gaul, and Suetonius wasn’t born yet, so they didn’t know about it for themselves).

Learn by doing: help some people who have been in a house fire
More about the Roman emperor Nero
Christians under the emperor Domitian

Bibliography and further reading about Nero and the Christians: