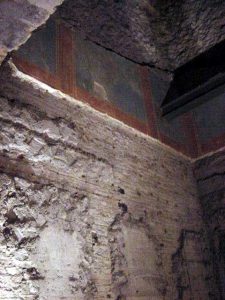 The inside of Nero’s Golden House: it’s very dark!

Why was Nero building a new palace?

After the Great Fire of Rome in 64 AD, the Roman Emperor Nero took advantage of the space where many buildings had burned down to build himself a new palace right in the middle of downtown Rome. He called his new palace the Golden House ( in Latin, that’s the Domus Aurea).

How do we know about it?

We know about the Golden House in two ways. The Roman historian Suetonius describes it for us, and also archaeologists have found it and excavated it (and you can visit it in Rome today). 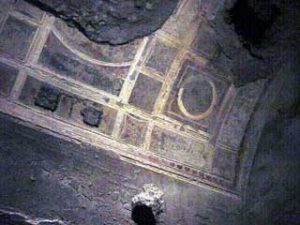 Even the ceilings of the Golden House were beautifully decorated. The white parts are raised plaster-work, not just painted.

In front of the Golden House, Nero put an enormous statue of himself, covered with gold. It was called the Colossus, because it was so big.

Even today, we call the Flavian Amphitheater the “Colosseum” because it stood near where that huge statue stood. That statue isn’t there anymore though. 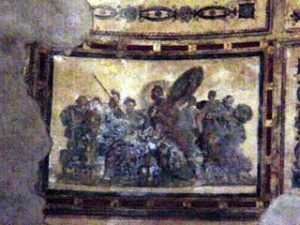 Hector and Andromache, on a fresco painting from the Golden House

Inside the Golden House

On the inside, Nero’s Golden House was also certainly very luxurious. For example, it had an eight-sided dining room with a ceiling that was painted with the moon and stars.

The Roman historian Suetonius wrote a long admiring description of it. He says that on nice evenings, Nero could open up the ceiling so that the real sky would be above you while you were eating. Nobody’s sure exactly how this could have worked. 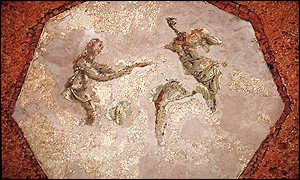 This one shows Odysseus killing the Cyclops Polyphemus

The walls and ceilings of Nero‘s palace were richly decorated with fresco paintings. They’re not in very good shape today, from being underground so long. But you can still get an idea of how beautiful they must have been when they were new.

Roman wall painting
Summary of the Iliad
Who was Homer?

The paintings are of classical scenes from the Iliad and the Odyssey. One scene shows Hector and Andromache, famous Trojans from Homer’s Iliad. Another picture shows the hero Odysseus killing the Cyclops Polyphemus. While he lived here, Nero would have been surrounded with everything that was carefully and beautifully done, and also with many reminders of the great poetry of Greek and Roman culture.

Nero also used a lot of new ideas in the Golden House. Underneath the plaster, Nero’s palace was all built of bricks and concrete.

What is concrete?
What are mosaics?

The bricks and concrete were much cheaper than stone, and quicker to build, so Nero could have his palace ready sooner and be able to start, as he said, “living like a human being!” (as Pliny tells us). And Nero’s Golden House was also the first place where they used mosaics on the ceiling as well as on the floor.

The end of Nero’s Golden House

But only a few years after Nero built his Golden House, his rivals overthrew him. Nero killed himself in 68 AD to keep his enemies from capturing him. And in the next year, when Vespasian became emperor, he was already building the Flavian Amphitheater, the Colosseum, to show that he was all about the people and not about being rich.

Who was Vespasian?
Year of the Four Emperors
Domitian’s palace

The emperors buried the old Golden House under piles of dirt and built the Baths of Titus on top of it. Vespasian’s son Domitian built a huge palace on the Palatine Hill.  It was on the other side of the Forum from Nero’s palace. So even though it had been so magnificent, the Golden House was quickly abandoned and forgotten.

Learn by doing: draw scenes from the Iliad and the Odyssey

More about the Roman emperor Nero

Bibliography and further reading about the Golden House (the Domus Aurea):

The Domus Aurea and the Roman Architectural Revolution, by Larry F. Ball (2003).

More about the Emperor Nero
Nero and the Christians
Colosseum