Why use concrete? History of Architecture 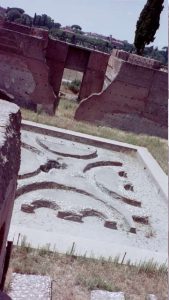 History of concrete: The fountain in the center of the courtyard is concrete (This is from the Palace of Domitian in Rome)

Concrete is a kind of man-made stone. Concrete is cheaper and easier to get than natural stone, and it’s easier to shape it. You make it by mixing lime and clay and sand and gravel and water.

What is limestone?
What is cement?
All about clay
Stone age buildings in Europe
All our early Europe pages

Lime is basically the ashes of limestone; it’s what you get when you burn limestone or marble. Lime and clay and water mixed make cement, and then you mix the cement with sand and gravel to make concrete.

What is marble?
More about sedimentary rocks

When was concrete invented?

The history of concrete goes back a long time; the earliest use we know about was to make a hard floor for a house in eastern Europe (modern Serbia) about 5600 BC. The Egyptians, Mesopotamians, Chinese, and Greeks knew how to make concrete but they didn’t use it very much.

Concrete in the Roman Empire

The Romans were the first to use a lot of concrete. Roman architects started to use a lot of concrete in their buildings about the time of the Emperor Nero, 60 AD. After Nero, Roman architects used it more and more. Usually they used a brick facing to cover the concrete and make it look prettier. Concrete made the dome of the Pantheon possible, and later the dome of Hagia Sophia. 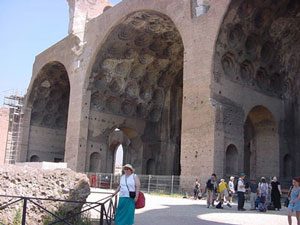 More about iron and steel
What is an aqueduct?

After the fall of Rome, neither the Islamic Empire nor the European kingdoms used as much concrete as the Romans had. They preferred to build in stone.

But when the British inventor Bessemer invented a way to make a lot of steel cheaply in the 1850s, architects realized that you could use concrete with the new steel beams to build very tall buildings cheaply – those were the first skyscrapers. Most concrete buildings today are reinforced with steel.

Did you find out what you wanted to know about the history of concrete? Let us know in the comments!

Learn by doing: a project with concrete

The invention of modern steel

Bibliography and further reading about the history of concrete:

What is Cement?
More about architecture
Quatr.us home