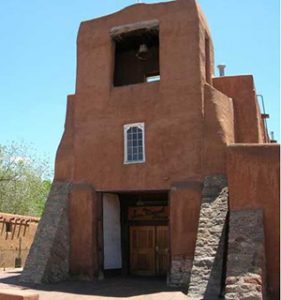 When people first came to North America from Spain about 1500 AD, they also built public buildings. The first ones they built were Christian churches, which people also used for meeting halls, courtrooms, and sometimes for schools. Jesuits and Franciscans from Spain built churches all across the southern part of North America, from Florida to California (especially in California). These churches were mostly in the same style as Spanish churches back in Spain, but with some changes. These churches were mainly built of adobe, or mud-brick, with tile roofs. 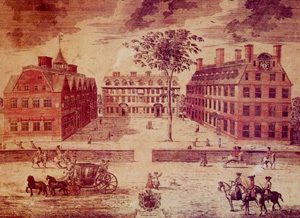 When people from England began to settle in North America in the 1600s, they also began by building a church for each town. Because these people were living further north, where there were more trees, they built their churches mainly out of wood. Like the people from Spain, these people also used their churches for meeting halls and courtrooms. These churches did not look much like their churches from England, which were usually built of stone. People also began to build schools, like Harvard College, which began at this time. 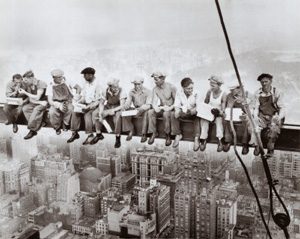 In the 1700s, as more and more European people moved to North America, they each began to build in the style they were used to from their own countries. To keep down the risk of fire in cities, people built more buildings of brick.

In the 1800s, people invented reinforced concrete – buildings made with frames of steel and concrete poured all around the steel. Reinforced concrete made it cheaper to build big buildings. People built big railroad stations, and also many big churches, schools, colleges, museums, and libraries.
In the 1900s, as more and more people moved to the cities of North America, people needed lots of big public buildings in the cities. Architects learned to build skyscrapers with steel frames and glass filling the spaces between the steel beams, like the Empire State Building in New York or the Sears Tower in Chicago. Many smaller buildings also used steel frames. Native Americans, especially, worked as construction workers to build these skyscrapers.

Learn by doing: visit the train station nearest you
More about American houses.