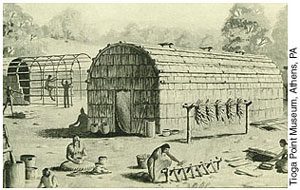 Houses in the Northwest

Because North America is a big place, different parts of North America have different weather. In the Pacific Northwest, there were long rainy winters, and dry sunny summers, but it never got very cold. There were big forests with lots of tall trees.

So people mainly lived in wooden houses with sloped roofs so the rain would run off. Around 1500 AD, Chinook people in the Pacific Northwest lived in houses built of wooden planks. Inside the house, there would be a big firepit, with a lot of alcoves where people slept. You lived in these houses along with your cousins and aunts and grandparents.

Who are the Chinook? 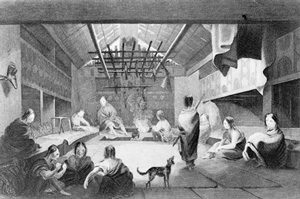 When the first European people moved into the Pacific Northwest, in the 1800s, they didn’t have the ability to saw planks out of logs, and a lot of them just built log cabins. These European people built their cabins just big enough for one family.

Once they had built sawmills on the river, they also began to build their houses out of wooden planks. But the European people used fireplaces and chimneys in their houses instead of open firepits, and they built houses for small families, instead of living with their cousins and aunts and grandparents (who hadn’t come with them).

Who invented the chimney?

Houses in the Southwest

Further south, in the Southwest, it was nearly always sunny and hot, and there was hardly any wood to build with. So people lived in pueblos (poo-EBB-lows), which were houses built of clay. Sometimes they made them several stories tall, and built staircases inside their courtyards, or used wooden ladders to get from one floor to another.

The Pueblo revolt
What is mud brick?

In the 1860s, when there were trains crossing the United States, some English people came on the trains to live in the Southwest. They missed the wooden houses they were used to, and they brought wood out with them on the trains so they could live in wooden houses. But these houses were very expensive, and not as cool in summer.

What about the Southeast? 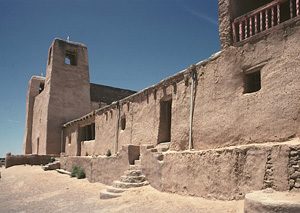 In the Southeast, it was still warm, but it was rainier, and also there was more wood. Cherokee people who lived in the Southeast often built wooden houses out of young trees, with woven branches filling in the spaces between the trees, and clay covering the branches. These houses had thatched roofs, like European and African houses of the same time.

Cherokee houses
What is thatching?

When European and African people moved into the Southeast, they also built wooden houses. The African people, who were forced into slavery, lived in small wooden houses, built of planks, which was not what they were used to, but more like what poor Europeans or Chinook people lived in.

These houses had wooden shingles for roofs, and often wooden chimneys (which often caught fire). They had plank floors or dirt floors. Often more than one family of unrelated people had to share a cabin. Most white people in the South lived in cabins that were not much better.

The richest European people lived in big wooden houses built of planks, like the houses rich Europeans had in their own countries. But these big houses didn’t have much more privacy than the little houses, because a lot of people lived in each house. Many people shared rooms. After the end of slavery in 1865, most people, black or white, still lived in these small houses, while a few European-Americans still lived in the big houses.

Houses in the Northeast

The Northeast part of North America also had plenty of wood, but much colder winters. Iroquois people here mostly lived in longhouses, which were built from young trees bent over to form arches, with bark shingles filling in the spaces. Like the houses of the Pacific Northwest, each house held not just your mom and dad and brothers and sisters, but also your cousins and aunts and grandparents.

What is a longhouse?
What is limestone? 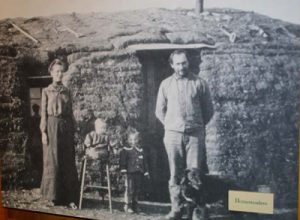 When English and Dutch people came to live in the Northeast, they did not build longhouses. Instead, they lived in plank houses, one family to a cabin. Some richer people built their houses out of brick or stone.

Houses in the Midwest and Plains

Further West, in the middle of North America, Sioux and Ute people travelled around a lot, and they lived in wickiups or tipis, which are big heavy tents covered with bison skins.

What is a wickiup?
Where are bison from?

The tents were as big as most log cabins, but people could take them with them when they moved to a new place. When Sioux (Lakota) people got horses, they were able to kill buffalo more easily, so they had more buffalo skins. And the horses could pull heavier loads than their dogs. They started to build much bigger tipis.

There was not enough wood on the Plains to build wood houses. Sometimes Sioux people did build dugout houses, dug into the side of a hill by a stream, to keep warm in the winter. The walls and the ceilings were made of packed dirt.

People from Scandinavia moved to the Midwest and the West in the 1800s, and they did not live in tipis. They wanted to farm and stay in one place, so they built dugouts and houses out of sod – strips of dirt held together by grass roots. These houses were warm in the winter. But they didn’t have many windows, so they were often dark. Once the railway was built in the late 1800s, people brought wood out on the train from the East Coast so that they could build timber-framed plank houses even on the Great Plains.

Did you find out what you wanted to know about American houses? Let us know in the comments!

Learn by doing: touring historic houses near you
American public buildings like churches and theaters.