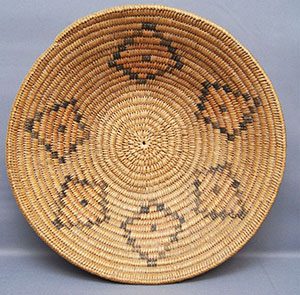 Ute people seem to have lived in the area of North America that is now the states of Utah and Colorado beginning at least by 500 AD. The Ute (YOOT) had no stories about coming to this area, which means that they were probably there a long time before that, too.

The Ute language is related to the language of other people who lived near them like Paiute people and Shoshone people. But it was also related to the Aztec language spoken in Mexico, far to the south (but that’s because the Aztec people moved south later on). The Ute people called themselves the Nuche, which means “the people” in their language.

Ute people did not have one king or chief, but lived in many small bands that traveled around hunting and gathering their food. They lived in small houses called wickiups. 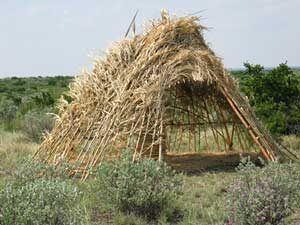 Ute people used plain gray pottery to cook their food and to store water. They also used a lot of baskets, sometimes covered with tar or pitch to make them waterproof.

Some time after the collapse of the Anasazi towns to their south about 1300 AD due to the Little Ice Age, Ute people moved south and took over some of the land that the Anasazi had controlled. But the Ute stayed far enough north that they didn’t meet any Europeans until the 1600s AD.

Learn by doing – a Ute wickiup
More about the Ute

Ute architecture
The Ute after the European invasions
The Navajo
The Shoshone
The Pueblo
More about Native Americans
Quatr.us home