What is a chiefdom? 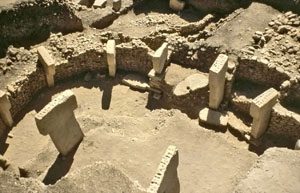 By about 9000 BC, in some places in West Asia and Egypt, towns were getting too big to be ruled by “big men“. Not everybody knew everybody else. They couldn’t just agree to be led by a total stranger. Gradually these towns developed chiefs. Instead of just letting big men arise informally, when they were needed, one of the big men would eventually decide that he should be in power all the time – he would be the chief.

Even though before this there had been a lot of women leading villages, most of these new chiefs seem to have been men, everywhere in the world. Maybe this is because the new chiefs needed to be war leaders as well as judges. Maybe it’s because men began to think of women as valuable property rather than people.

Instead of farming, like the other people in the village, the chief would spend all his time organizing things and deciding things for the village. He would be the judge if anyone disagreed. He would organize big things like wars, or building a town wall, or a new irrigation system.

Often there were people who disagreed about who should be chief. Then one chief might be killed, and somebody else would get to be in power. But once you have started having a chief, it’s hard to stop again, because there’s always somebody who wants to be chief.

Pretty soon, the chiefs also began to want their sons to be chief after them. Sometimes they were able to manage this and sometimes not. Again, it’s hard to avoid this, because mostly if your father was chief and then he dies and somebody else becomes chief, the first thing the new chief does is kill the old chief’s sons, to make sure they don’t plot against him.

As chiefs inherited their power from their fathers, they began to think of themselves as special people, more important and closer to the gods than ordinary people. They married the daughters of other chiefs, and soon people felt that only people born into this special group of people should be chiefs. They had “royal blood”.

Learn by doing: write a persuasive essay explaining why you should be chief
More about complex chiefdoms

Bibliography and further reading about chiefdoms: