What are complex chiefdoms? 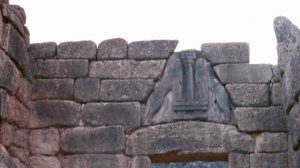 As we get on into the Middle Bronze Age (the century varies depending on where you are) villages just kept on getting bigger and bigger. After a while the villages were really towns and cities. Some places had thousands of people living in them.

Now even a very hardworking chief just can’t manage to take care of all the decisions and arguments of thousands of people. So he would begin to delegate, to choose some of his friends to take charge of this or that. One guy would take charge of distributing the water fairly. Another would be in charge of the army. Somebody else would negotiate trade agreements. Women sometime were chiefs, and sometimes took care of trade agreements or other jobs, but less often than men. Powerful men tried to keep the women in their families in the house, away from the public.

Another change with the Bronze Age was that sometimes one chief would use his army to conquer a bunch of other cities. Then there would be one super-chief who could boss around all the conquered chiefs. Or sometimes all the chiefs might just agree to choose one chief to lead them all. One example is the story of Agamemnon and the Trojan War, where Agamemnon is the king of a small town called Mycenae, and there are a lot of other kings like Menelaus and Odysseus, who are the kings of Sparta and Ithaca, but Agamemnon is in charge of all of them, especially when there is a big war.

Learn by doing: read more about Agamemnon in the Iliad
More about state societies