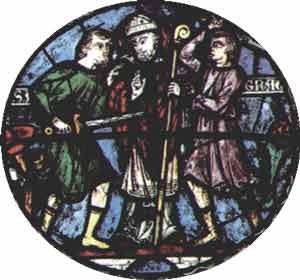 The murder of Thomas a Becket in the 1100s AD

The new, big, monotheistic religions of Buddhism, Christianity, and Islam developed between 500 BC and 600 AD. They brought with them some new ideas, and some new problems. First, people began to separate religion from the rest of their life. In particular, they separated their religion from their government for the first time. Before the 500s BC, religious leaders and government leaders were generally the same people or, as in Mesopotamia, each other’s relatives.

But Christian bishops, Buddhist monks, and Islamic imams were often not government leaders. They sometimes fought with the government. Sometimes there were terrible persecutions. Roman soldiers arrested Christians and fed them to lions. Abbasid leaders massacred Shiites. T’ang Dynasty Chinese emperors killed many Buddhists. At other times, religious leaders like Bishop Ambrose of Milan or the Zen Buddhist Bodhidharma served as a balance and control on the power of the kings and emperors.

These big new religions demanded that everybody believe exactly the same thing. So they had a tendency to constantly split into smaller groups, whenever people disagreed about what to believe. Almost as soon as Islam got started, it split into Sunni and Shiite Islam, when people disagreed about who should be Islam’s next leader. That split is still dividing people even today. Not long afterwards, the Sufis split off from Islam, looking for a closer, more direct connection with God.

Further east, Buddhists also split into many smaller groups, like the Zen Buddhists in China about 500 AD, who believed that you should learn from experience and meditation, rather than from scrolls and lectures.

And to the west, Christians began breaking off into their own groups almost as soon as Christianity got started too. First the Montanists split off (Like the Sufis, they were seeking a more direct connection to God). After them were the Manichaeans (who wanted God and the Devil to be equally powerful) and the Nestorians (who thought there were two separate Jesuses – a man Jesus and a god Jesus). The Arians wanted to be more monotheistic. Then came the Donatists, who wanted to be much stricter than other Christians.

In medieval Europe, the Albigensians or Cathars tried to be extra pure (they were vegans and thought men and women were equal), and other Christians burned them for it. Franciscans thought Christians should live in poverty. Then in the 1500s AD, as more and more people learned to read, the Protestants split off from the Catholics over whether you could read the Bible for yourself, or you needed a priest to tell you what to believe; the Thirty Years’ War was one result. In the 1600s, more people split off from the Protestants: the Puritans and the Quakers, and the Jesuits began to argue with other Catholics. Then in the 1800s, the Mormons started their own take on Christianity. Even today, people continue to split off into new religious groups, and the relationship between religion and government continues to be something people fight about all over the world.

Learn by doing: make up a new religion. What would your rules be?
Early Religions