Buddhist monks in India and China 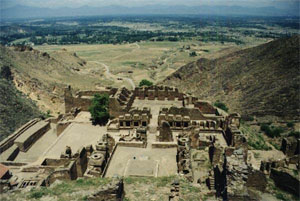 Takht-i Bahi, a Buddhist monastery in eastern Pakistan (about 50 AD) where Buddhist monks could study

While Gautama Buddha was still alive, about 500 BC, he had many followers. Some of these men and women in India wanted to be extra good Buddhists. So they decided to try to live as purely as they could. They did not want to get bad karma.

What is karma?
What is Buddhism?
More India articles

These men and women left their work and their families and all their stuff behind. They chose to live alone or in small groups in the woods. Many of them got their food by begging.

But during the monsoon season, it was too wet to live outside in the woods. Even while the Buddha was still alive, some rich Buddhist people began to build houses. These begging monks could live in the houses during the rains every year.

What is the monsoon?

Gradually most of the monks began to live in these houses, or monasteries, all year round in communities of monks. Each monk usually had his own cell inside the monastery, and all around the monastery there were orchards or gardens.

As these Indian Buddhist monasteries got bigger and richer, they started to support teachers and students and expert scholars. Some of them turned into universities. The biggest Buddhist universities were the ones at Taxila and Nalanda.

Mathematicians at these universities invented Indian numbers, the use of zero, and a lot of basic trigonometry and probability theory. Doctors there invented inoculation against smallpox.

Indian mathematics
What was smallpox?
Science in ancient India 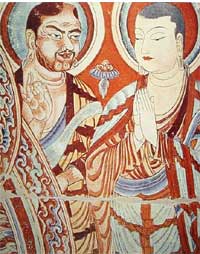 As with Christian monasteries about the same time, the Buddhist monasteries got more and more involved in businesses like farming, trade, and banking. The leaders treated a lot of poorer monks pretty much like slaves, and the monasteries also owned slaves.

By the 500s AD, the monasteries had gotten so big and so rich that emperors of the Chou and the T’ang dynasties closed many of the monasteries and took their riches for the government.

Who was Bai Juyi?

Buddhist monks in China believed that making many written copies of Buddhist prayers would help you acquire merit. In order to copy the prayers faster, the monks worked on the invention of printing.

By the 600s AD, the Japanese emperors paid to build many Buddhist monasteries in Japan, too.

But in the last years of the T’ang Dynasty, about 840 AD, Emperor Wu-Tsung really closed a lot of the Buddhist monasteries and took their money away. He ordered all the Buddhist monks and nuns to go back to ordinary life.

After that, although many people in China were still Buddhists, the monasteries were not as rich or as big anymore.

Did you find out what you wanted to know about Buddhist monks? Let us know in the comments!

Learn by doing: check out Buddhist art in an art museum
More about Buddhism
Christian monks