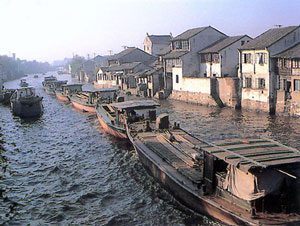 In 581 AD, a general named Wendi from northwest China succeeded in conquering the other two kingdoms. He established a new dynasty in China, with emperors who ruled all of China like the Ch’in and the Han. This was the Sui Dynasty.

What came before the Sui Dynasty?
Lots more China articles

Like many Chinese people at this time, Wendi was a Buddhist. Wendi made himself popular by trying to make the government better than it was during the Three Kingdoms. He ordered that poor people in the countryside should pay less taxes than they had before.

Wendi sent men around to all the provinces to count how many people there were and how much land and money each of them had (this is called a census) so that the government would know how much taxes that province should pay. Like other reformers, Wendi also wanted to redistribute the land.

Why did Wendi want to redistribute land?
Farming in medieval China

He ordered that every man should get a certain amount of land to farm. When the man turned 60 and was too old to farm, he would stop paying taxes and give back some of the land. He could pass on the rest to his sons.

Wendi also decided to go back to the Han Dynasty way of picking his government officials. He used the university and the great examinations to find out who were the smartest and best educated men (Women were not allowed to be government officials at this time). 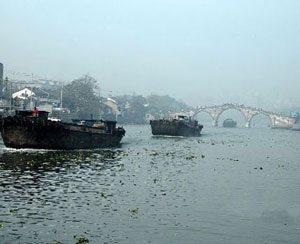 Sui Dynasty: Another view of the Grand Canal

Wendi died while he was still not old. Maybe his son Yangdi killed him – Yangdi wanted to be the emperor himself. In any case Yangdi did become the next Sui emperor. Yangdi wanted to be a great emperor, so he began a lot of important projects.
Yangdi’s best project was one where people dug a Grand Canal which connected the Yellow River with the Huai and Yangtze Rivers. The canal made it much easier to get from northern to southern China and back again.

But Yangdi’s worst project was that he attacked Korea to try to take it over.

Korea in the Middle Ages

He got together a great army of over a million men to invade Korea, but his great army was defeated and had to run away. The army generals were angry about this and killed Yangdi. That was the end of the Sui Dynasty.

Bibliography and further reading about the Sui dynasty in China: