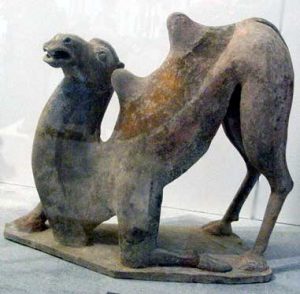 What came before the Sui Dynasty?

In the Three Kingdoms period, Chinese artists had learned a lot about Indian and West Asian sculptural styles.

How was Sui Dynasty art different?

Now in the Sui Dynasty, in the late 500s AD, artists transformed what they had learned and mixed it with Chinese styles to create a new, unified, uniquely Chinese style in sculpture.

And they used the same style all over China, as if to emphasize that all of China was again under one Emperor. 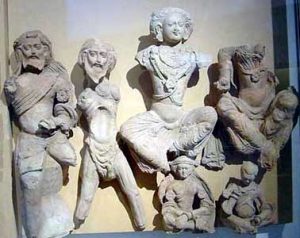 Sui Dynasty scene from one of the earlier incarnations of the Buddha (both Musee Guimet, Paris)

What about Sui Dynasty painting? 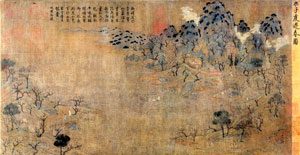 For example, in this landscape by the Sui dynasty artist Zhan Zi-qian, some of the trees are bigger and closer, while the forest is far away. Unlike in West Asia, where most paintings were still frescos on plaster, or painted on wood, Chinese painters were beginning to paint more on silk or paper scrolls, so they could sell or give away the paintings.

(What was Byzantine art like at this same time?)

The red stamps on this painting are the seals of the painting’s many owners. Each one put his or her own seal on the painting. People considered these seals to be adding value to the painting, not messing it up. The seals showed that a long line of honorable, important people had owned this painting and loved it. 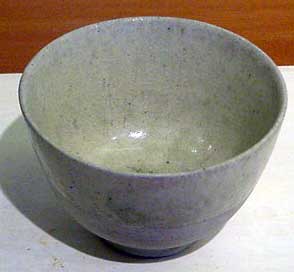 What about Sui Dynasty porcelain?

This was also a time of developing pottery styles. In the Sui Dynasty, for the first time, we see recognizable beginnings of the great Chinese porcelain industry (that’s why we call our dishes “china”!).