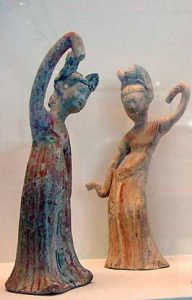 Sculpture, which had really begun to develop during the Sui Dynasty, reached its height under the T’ang Dynasty. Sculptors emphasized graceful lines and sharp, clear forms, and good proportions (the head the right size for the body, the legs and arms the right length). 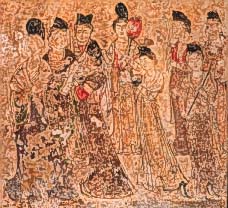 But Chinese painters kept right up with the sculptors. Instead of painting mainly pictures of the Buddha, now artists painted scenes from history (famous emperors and famous battles), and scenes of everyday life at the emperor‘s court. They tried to make people look real and solid. 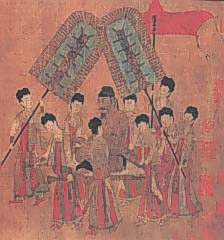 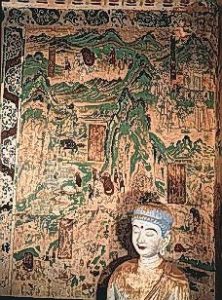 Landscape mural from the Dunhuang Caves

Nature was a more and more important theme to these painters. In the 700s AD, the painter Han Kan was famous for his paintings of horses, for instance, and many other artists also chose to paint animals.

Other artists were more interested in landscape painting. In Chinese this is called shanshui (mountain-water) painting. They used brushes and bright green and blue paint to show high rocky mountains and cliffs, with rivers, rocks, and trees. These artists were not interested in showing what nature really looked like, like a photograph. Instead, they were trying to convey the spirit of that place – what it felt like to be there. Usually they did not put in all the details, just enough to give you the appropriate feeling. In fact, they thought it was better art if it could give you the same feeling with fewer lines. 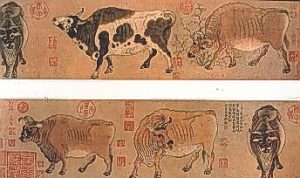 Here’s a video of women dancing in Tang Dynasty style (compare their long sleeves with the figurines above).

Learn by doing: paint your own landscape
Tang Dynasty pottery (the first porcelain)