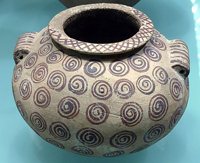 The beginning of meanders? An Egyptian pot with spirals (Naqada II, ca. 4000 BC)

A meander is a kind of pattern that artists used to decorate the borders or edges of pictures. They’re called meanders because “meander” means to wander. So these are lines that wander around before they get anywhere. Some meander patterns are simple, and others are more complicated. 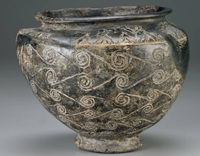 The very beginnings of meanders may be painted spirals. We see painted spirals on Stone Age Egyptian pottery from about 4000 BC. These spirals might represent water – waves? – but it’s hard to say. By about 1700 BC, artists in Sudan, further south, were connecting those spirals in a running spiral pattern.

Those running spirals were popular. They soon spread from Sudan to Egypt, and from there to Greece. To the Greeks (and maybe also to the people of Sudan and Egypt), these spirals probably represented the afterlife. That is why you see running spirals on gravestones and on clay pots used as grave markers.

There’s a similar pattern on many bronze jars from the Chinese Shang Dynasty. We call this pattern the “thunder cloud” or lei-wen. It appears first in the 2000s BC. In China, the pattern represented rain and good harvests, and the jars were – again – put in people’s graves. Nobody knows whether these patterns are related. 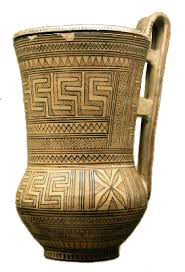 Meanders on a Greek geometric vase, 800s BC (now in the British Museum)

Roman meanders: The carved frieze on the Ara Pacis shows Augustus and his household going to perform a traditional religious sacrifice.

You can see another complicated meander pattern carved into the Ara Pacis, the Altar of Peace, in Rome. The emperor Augustus built the Ara Pacis about 30 BC.

More about the Ara Pacis

This was right after the Romans had conquered Greece. Roman artists wanted to show that they were cool and could use Greek art ideas, but in their own way. But with the rise of Christianity, meanders fell out of use in Roman and medieval art. Maybe they seemed too much like reminders of the traditional afterlife. In China, artists kept on using meanders.