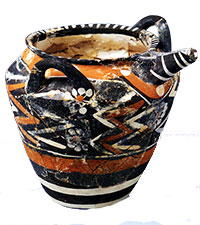 While the Mycenaean Greeks were making the gray Minyan Ware, the Minoans on the island of Crete were producing vividly colored pots with black backgrounds known as Kamares ware (ka-MARR-ays). 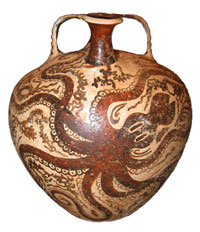 Here is a Minoan octopus vase.

Then in the Late Bronze Age, around 1500 BC, the Minoans shifted to painting creamy backgrounds with wildly flowing ocean scenes of fish, seaweed, and octopuses. 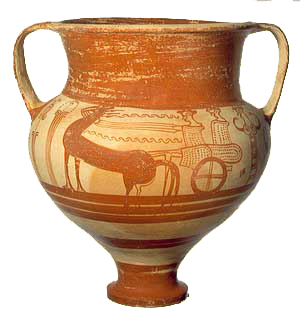 About the same time, the Mycenaeans also began painting creamy backgrounds with pictures of real things (as in the earlier Dimini period), but the Mycenaeans mainly didn’t choose ocean creatures. They painted horses, chariots, men and women instead. 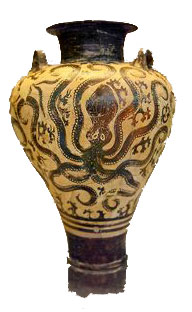 In the end of the Mycenean period, after the Greeks had conquered Crete, Mycenaean potters began to imitate Minoan (Cretan) pottery styles. But when the Mycenaeans copied Minoan octopus pots, they painted the octopus much stiffer and more symmetrical, much less wild than the Minoan ones (and not looking so much like octopuses or seaweed). That’s the same attitude that Mycenaean painters doing frescoes in the palaces showed too. 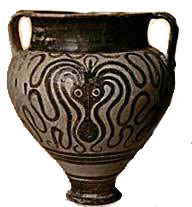 Towards the end of the Late Bronze Age, the octopuses got simpler and simpler, and more and more abstract. 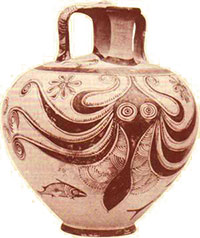 An even later octopus vase

During the Greek Dark Ages, Greek artists painted the octopus just as one long wavy horizontal line around the middle of their vase.

Learn by doing: draw your own octopus
More about Sub-Mycenaean (Dark Age) pottery